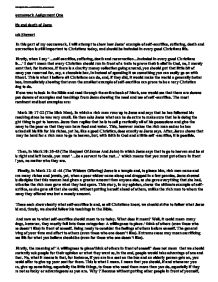 Religious Studies GCSE Coursework Assignment One Life and death of Jesus Jack Stewart In this part of my coursework, I will attempt to show how Jesus' example of self-sacrifice, suffering, death and resurrection is still important to Christians today, and should be included in every good Christians life. Firstly, when I say '...self-sacrifice, suffering, death and resurrection...included in every good Christians life...' I don't mean that every Christian should run in front of a train to prove their belief in God, no, I merely meant that, for instance, if there is a charity money collection going around, you should put that little bit of money you reserved for, say, a chocolate bar, in instead of spending it on something you can easily go on with without. This is what I believe all Christians can do, and, if they did, it would make the world a generally better place, immediately showing that even the smallest example of self-sacrifice can prove to be a very Christian thing to do. If one was to look in the Bible and read through the entire book of Mark, one would see that there are dozens upon dozens of examples and teachings from Jesus showing the need and use of self-sacrifice. The most prominent and best examples are: * Mark 10: 17-22 (The Rich Man), In which a rich man runs up to Jesus and says that he has followed his preaching since he was very small. He then asks Jesus what can he do extra to make sure that he is doing the right thing to get to heaven. Jesus then replies that he is to sell practically all of his possessions and give the money to the poor so that they can have food and water. ...read more.

This is where the spiritual part of the body with no form continues to live after the body has died. This would be the part of the being that is contacted during seances and by mediums. The weakness would be that, when you die, if your spirit remains, what does it do? Does it just float around a bit and scare people? Wouldn't eternal existence get a bit boring after a while? However this is probably what people come into contact with when they see ghosts or have spiritual encounters. Another strength is that when people have temporarily died and have an out of body experience, they often see themselves on the bed or wherever they were, from a position on the ceiling. Some people have seen things on top of cupboard that they would never have know were there otherwise. I do not think that this is very likely, I usually dismiss things like out of body experiences as a coincidence or a spooky dream brought on by film and television ideas. 3. When you die, you are reincarnated many times as people, or sometimes animals. Hindus, Buddhists and Sikhs hold this view. Throughout your lives your good and bad deeds build up, the goal being to move a step up the 'ladder' each time until you have reached the highest level when you will be with god. Then the soul is absorbed back into god. The soul cannot die throughout this process. This is a nice thought. It means that you would live your life trying to be good and kind, because then you would get closer to god. However, if we are all reincarnations, why can't we remember our previous lives? ...read more.

Mediums have always seemed to me like smart people getting a lot of money out of silly people for sitting in a dark room with a gypsy-style headscarf knotted around their head and a funny handbag, talking in a wavery voice while talking a load of rubbish. While I am sure that there are some people who are convinced that they can contact the dead, and can answer questions that they could not have otherwise, (which I can think of no valid explanation for) most of it seems to be made-up on the spot while sticking to a well-used plan. I find it hard to accept that a God that I don't believe in is watching me in a way that I find impossible to understand, and when I die a part of me that I don't think exists will go to a place that I don't think is real and a day that I don't think exists will come and the dead will be resurrected which I do not think is possible. So, to conclude, self sacrifice can be in many forms and in many different difficulties, yet, even the least enthusiastic Christian is fully capable of helping one and other, be it holding a ladder for someone for a couple of minutes, or just asking someone if they think what you are to do is sensible beforehand, we should be ready to give up some of our time and/or effort for others as, when we are in the same situation, we would want them to help, and by doing this, we are nearing Jesus dream of a perfect world of peace on Earth. ...read more.