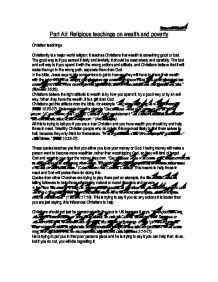 Religious teachings on wealth and poverty

Mustafa Hussein Part Aii: Religious teachings on wealth and poverty Christian teachings Christianity is a major world religion; it teaches Christians that wealth is something good or bad. The good way is if you earned it fairly and lawfully, it should be used wisely and carefully. The bad and evil way is if you spend it with the wrong actions and attitude, and Christians believe that it will make them go in the wrong path, separate them from God. In the bible, Jesus says to his companions to get to heaven, they will have to share their wealth with the poor. For I was hungry and you gave me something to eat. I was thirsty and you gave me something to drink. I was a stranger and you invited me in. I needed clothes and you clothed me." (Matthew 25:35). Christians believe the right attitude to wealth is by how you spend it, by a good way or by an evil way. ...read more.

Dear children let us not love with words or tongue, but with tongue actions and in truth?" (1 John 3:17:18). This is trying to say if you do any actions it is louder than you are just saying, this influences Christians to help. Christians should not just be concerned with the poor in UK because it says, "What good is it, my brothers, if a man claims to have faith but has no deeds? Can his faith save him? Suppose a brother or sister is without clothes and daily food. If one of you says to him, 'go I wish you well; keep warm and well fed; but does nothing about hid physical needs, what good is it? In the same way faith by itself, if it is not accompanied by action is dead" (James 2:14-17). He is trying to put you in that poor persons place and he is trying to say if you can help than do so, but if you do not, you will die regretting it. ...read more.

to me, the most important is help the people across the world' because they might not have no food or shelter. "If the debtor is in a difficultly, grant him time till it is easy for him to repay. But if you remit it by way of charity, that is best for you if you only knew," (Surah 2:280). This is trying to teach Muslims to be patience and sympathetic if the debtor is unable to repay the debt back. Muslims are encouraged to not take Riba (interest), as this is taking advantage of those less fortunate and making life more difficult for them. Christians and Muslim followers should respond on what there religion is expected of them. On how they spend their wealth? They should spend it in a mannered way, what I mean is that not spending it on drugs.... Still people behave in the wrong way, which God does not want you too. It is like a test to see if you had wealth how would you spend it? Mustafa Hussein ...read more.