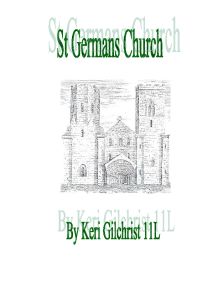 Introduction In July 2001 all the year 10 went to St Germans Church in Cornwall. The purpose of this study is to look at the changes that have occurred in history. To help me explain this I will be using documentary and archeologically evidence. The church was very pleasant to visit. It was in a quiet little village that was not that busy at all. The church was hidden by bushes and hidden down in a hollow. In my coursework I will talk about the history of the church here is a brief history of the church, which will be explained fully later on in the work. The church has been there since the Saxon's times, the first mention of St Germans Church was made on December 5th 936. We know this because in the 930's King Athelsten was conquering Cornwall and had written all the places he had conquered. We think St German Church was a cathedral because they have that is was not a cathedral from 1052. The church was been the centre of pilgrimages (monks) which was set up between 1161 and 1184. The monks brought a lot of money to the church and the town but Henry 8th closed or monasteries and kicked all the monks out, no one would then buy the premises so they decided to rent out the premises, which that meant that St Germans Church started to lose money and so did the town as well. Then in 1592 the Elliot family brought the Church and made changes to it, they added their own family pew and rebuilt the North Aisle. Location Position St Germans Church is located next to the magnificent house if the Elliot's. The church is in South East Cornwall on the River Lyner. The Church is built in a hollow to protect it form the prevailing southwesterly winds. It is behind a large hill called Colgear Hill, which would give it protection from Cornish Pirates coming up the estuary. ...read more.

This had a very bad effect as it dwarfed the columns and spoilt the proportion of the arches. The south aisle was very unusual with a grand wall, posh large perpendicular windows, which was built, form the money the reliquary chapel and the monks. In the church you can see a diagonal line and markings where the old roofline, which is visible in the present of the south Aisle, and North tower. If you look towards this diagonal line at the back of the church you will see a Coat of Arms of King Charles, which was presented to the Cornish Churches for their help during the Civil war. Behind the coat of arms is the diagonal line of stones marking the original lean - to aisle edging onto the central nave. Parts of the Clerestory windows can still be seen above the aisle column. Originally there was a row of clerestory windows either side of the nave and above the lean - aisles to let light into the main nave. Chancel Disaster "The parish church answereth in bigness the large proportion of the parish and the surploss of the priory, a great part of whose chancel, anno 1592 fell suddenly down upon a Friday very shortly after public service was ended, which heavenly favour, of so little respite, saved many persons' lives, with whom immediately before it had been stuffed and devout charges of well disposed parishioners quickly repaired this ruin." Carew wrote this in the 1590's. It was a paragraph form 'The Survey of Cornwall' The paragraph above tells about when the chancel fell and what was happening just before the chancel fell down. This is evidence that there was a chancel and it did fall down. The chancel fell down three times but disastrously in 1592, after which time the grant east window of ten lights erected in its present position. ...read more.

I don't think it is reliable as some of the documents are because he is married to someone who has been brought up in and wouldn't want to make St Germans sound like nothing has happened so he could be a bit bias to her. Is it corroborated? Some of the information is corroborated but not everything is corroborated. Other comments Because the document was written in 18th century the language it is written is quite old. Document 5 Source Hendenam Cornish church guide, 'Parochial, history of Cornwall' What does it say? This document writes about all the history of the church in a very brief way. It starts at the beginning when the church was just founded, then goes on to when the church was first written about by Athelsten. Then he wrote about the Diocesan bishopric in Cornwall. It is a significance of the importance of the Celtic church. When threw creation of bishopric was moved to Crediton and Exeter. Then he goes to say how the church changed through time and how the Elliot's became in charge. Is it authentic? I think this is authentic because it is a church guide which a lot of people will be reading, they don't want to be reading lies so that is why I think its authentic. Is it reliable? I think this document is reliable because it has a lot of over documents that confirm this as well, which is good. It is also written by someone who has nothing to do with the church and which makes it unique. Is it corroborated? I think this document is corroborated with most of the documents. 1. A lot of evidence saying Athelsten wrote about the church first. 2. The creation of the Diocesan Bishopric 3. The Bishopric was moved to Crediton ands Exeter 4. The church was redecorated 5. The priory became owners of some relics 6. The Elliot's took over the church Other comments The guide isn't written in a language that is difficult to read and tell you a quick summary of everything about eh church which is very good. ...read more.