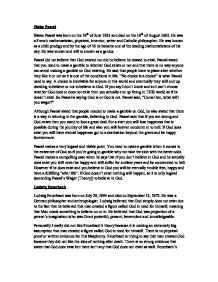 The Existence of God

Blaise Pascal Blaise Pascal was born on the 19th of June 1923 and died on the 19th of August 1662. He was a French mathematician, physicist, inventor, writer and Catholic philosopher. He was known as a child prodigy and by the age of 16 he became one of the leading mathematicians of his day. He was known and still is known as a genius. Pascal did not believe that God existed nor did he believe he ceased to exist. Pascal stated that you need to make a gamble to whether God exists or not and that there is no way anyone can avoid making a gamble on God existing. He said that people have to place a bet whether they like it or not as it is one of the conditions in life. "No choice is a choice" is what Pascal used to say. A choice is inevitable for anyone in this world and eventually they will end up deciding to believe or not to believe in God. ...read more.

to believe in God. Ludwig Feuerbach Ludwig Feuerbach was born on July 28, 1804 and died on September 13, 1872. He was a German philosopher and anthropologist. Ludwig believed that God simply does not exist due to the fact that he believed that man created a figure called God in need for himself, meaning that Man needs something to believe on or in. He believed that God was projection of a person's imagination who was Omni powerful, present, benevolent and knowledgeable. Personally I really did not like Feuerbach's theory because it is making an extremely big assumption that man created a figure called God in need for himself. There is no physical proof or written evidence for this blasphemy. Feuerbach is trying to say that man created God because they did not like the idea of nothing after death. There is no strong evidence that states that God does exist but there isn't any that God does not exist as well. ...read more.

St Thomas Aquinas St Thomas Aquinas was an Italian Dominican Priest of the Catholic Church who was an immensely influential philosopher and theologian. St Thomas believed that God exists because the universe wouldn't have come out of nothing. Everything has a cause. He said that "something" cannot come from "no-thing" therefore the universe must have a cause. He believed that the first cause is God due to the fact that God is the only uncaused cause. To support this Aquinas used an example of motion. He said that nothing can be moved from a state of potentiality to actuality, except by something in a state of actuality. He is trying to say that if something moved something would have had to move it before for it to move. Logically this makes complete sense however I believe there are some flaws with this "argument". I believe that this theory does not prove that God exist because the uncaused cause does not necessarily have to be God. The uncaused cause can and could have been anything. ?? ?? ?? ?? ...read more.