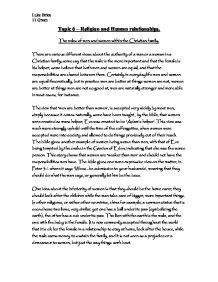 The roles of men and women within the Christian family.

Topic 6 - Religion and Human relationships. The roles of men and women within the Christian family. There are various different views about the authority of a man or a woman in a Christian family; some say that the male is the more important and that the female is his helper, some believe that both men and women are equal, and that the responsibilities are shared between them. Certainly in everyday life men and women are equal theoretically, but in practice men are better at things women are not, women are better at things men are not so good at, men are naturally stronger and more able in most cases, for instance. The view that 'men are better than women', is accepted very widely by most men, simply because it comes naturally, some have been taught , by the bible, that women were created as mans helper, Eve was created to be 'Adam's helper'. This view was much more strongly upheld until the time of the suffragettes, when women were accepted more into society and allowed to do things previously out of their reach. ...read more.

Christian marriage ceremonies - and the way in which these reflect and emphasise Christian teaching about marriage. The ideal Christian marriage is a life settlement, where a man and woman who are in love are joined together and stay that way 'until death do us part'. Unfortunately it is not like this very much any more. People are getting divorced very much more nowadays than when they were much more religious. The marriage ceremony is usually held in a church or a registry office, hosted by a priest, or a vicar, it is started by the host outlining the reasons for marriage, and the ideas behind it, such as the fact that God created marriage to symbolise the unity of two people, and that God is their witness. It then proceeds to ask the couple if they are willing to go ahead with the ceremony with the relatives and friends as their witnesses. They make promises to each other in the name of God that they will honour and protect each other until they die, and that they will be faithful, no matter what happens. ...read more.

They can, however, have sex at the time of month when the woman is least likely to become pregnant, as this is completely natural. Any form of Christianity will say that sex before marriage, homosexual relationships, and relationships with someone other than your spouse is wrong. These are also reflected in most other religions around the world, each saying that all of these things are wrong. Most Christians believe that the human body is a holy temple, an amazing creation, which of course it is, it is incredible that such a complex structure can possible be formed, so it can have feelings, pain, pleasure, hate, love. They believe that we must treat it with the most respect we have for anything and that to spoil it in any way, would be distasteful and wrong. We must preserve our bodies and use them solely for what they were designed. Some Christians, however, believe that if there is truly love in a relationship, then the acts of a married couple can be carried out, and that they are essentially, already married in their heads. This belief is based on the fact that the main belief of Christianity, love, and its importance. Luke Brice 11 Green ...read more.