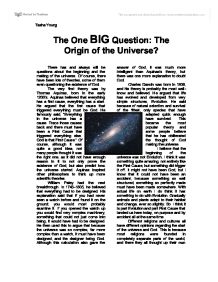 There has and always will be questions about the beginning and the making of the universe. Of course, there have been lots of theories, some of them even questioning the existence of God.

The One BIG Question: The Origin of the Universe? There has and always will be questions about the beginning and the making of the universe. Of course, there have been lots of theories, some of them even questioning the existence of God. The very first theory was by Thomas Aquinas, born in the early 1200's. Aquinas believed that everything has a first cause, everything has a start. He argued that the first cause that triggered everything must be God. He famously said, "Everything in the universe has a cause. Trace those causes back and there must have been a First Cause that triggered everything else. God is that First Cause." Of course, although it was quite a good idea, not many people thought it was the right one, as it did not have enough reason in it to not only prove the existence of God, but also predict how the universe started. Aquinas inspired other philosophers to think up more scientific theories. William Paley had the next breakthrough. ...read more.

Different religions and cultures all have different opinions regarding the start of the universe and God. This is because most religions were founded in completely separate parts of the world, and there they all thought up their own individual theory on how the universe was created. They usually all link back to the main three ideas; they just have different stories and Gods to explain it. Christians, Jews and Catholics all believe in the same God. They believe in Paley's theory, that God was the designer of everything and that his creation was much to complex to leave to chance. They tell the story of how God made the universe in just seven days, which, in the eyes of scientists and atheists, is impossible. Hinduism believes in one main God, Brahman, but because he is so powerful they split him into thousands of different Gods, all with its own personality representing Brahman. Hindus believe that the universe undergoes an endless cycle of creation, preservation and dissolution. This is very much the same as the First Cause theory, and gives enough reason for Hindus to believe God is real. ...read more.

If he wasn't all these things, then the praying, the places of worship and the strict rules that they have to follow would have been for nothing. To them God is everything and without him, what do they have? This is why, if ever you tell a Christian, "There is too much suffering in the world. God cannot exist," they always have an intelligent answer ready. The most common reason is 'because God gave people free will'. After Noah and the Ark, there was a rainbow in the sky, and that was Gods promise never to interfere again. Of course, that doesn't excuse natural disasters like Haiti or the Tsunami, but there are stories of people who had been 'told' by God to get out of there, that something is going to happen. Another card Christians play is 'everything happens for a reason'. God has a set path for everyone on Earth and it's our chose to follow it or not. Christians say that innocent people to unfortunately die, but it is done so we learn from our mistakes, so we can try and become better. It is hard to think that everything is done for a purpose. What do you think? ...read more.