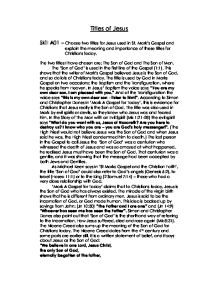 Titles of jesus A01

Titles of Jesus Skill A01 - Choose two titles for Jesus used in St. Mark's Gospel and explain the meaning and importance of these titles for Christians today. The two titles I have chosen are; The Son of God and The Son of Man. The 'Son of God' is used in the first line of the Gospel (1:1). This shows that the writer of Mark's Gospel believed Jesus is the Son of God, and so do lots of Christians today. The title is used by God in Marks Gospel on two occasions: the Baptism and the Transfiguration, where he speaks from Heaven. In Jesus' Baptism the voice says "You are my own dear son. I am pleased with you." And at the Transfiguration the voice says "this is my own dear son - listen to him!". According to Simon and Christopher Danes in 'Mark A Gospel for Today', this is evidence for Christians that Jesus really is the Son of God. The title was also used in Mark by evil spirits or devils, so they knew who Jesus was and feared him. ...read more.

How Jesus suffered, died and rose again (Mk 8:31). The Nicene Creed also sums up the meaning of the Son of God for Christians today. The Nicene Creed dates from the 4th century and some parts are earlier still. It is a written statement of belief, and it says about Jesus as the Son of God: "We believe in one Lord, Jesus Christ, the only Son of God, eternally begotten of the father, God from God, Light from Light, true God from true God, begotten not made, of one Being with the Father. Through him all things were made. For us men and for our salvation he came down from heaven by the power of the Holy Spirit he became incarnate form the Virgin Mary, and was made man." Simon and Christopher Danes suggest that, through Jesus, Christians can see what God is like. 'Son of' can also translate as 'like', so Son of God can also mean 'like God'. His teaching has God's authority, which makes him the perfect human being. ...read more.

It is said that this shows the Son of Man's life was a ransom, but eventually will be seen on the right hand of God in the clouds of Heaven. This is the assumption that the atonement theory of sacrifice is true (that Jesus came to die for our sins). Jesus also says that the Son of Man will suffer and die, rise again and will come in glory at the end of time to judge people. Christians today don't use the title Son of Man very often when talking about Jesus (but the ideas behind his words are still important to them). As Simon and Christopher Danes say in 'Mark A Gospel for Today', Christians believe Jesus has God's authority, he can forgive sins, Jesus' death means salvation for everyone and Jesus is with the Father in heaven, but will return to earth in glory at the end of time. They also believe Jesus is fully God and fully human, the incarnation of God. So like the Son of Man in the Old Testament, Christians believe Jesus had the authority to forgive sins. They also say that his destiny was to suffer and die and to give himself as ransom for our sins. ...read more.