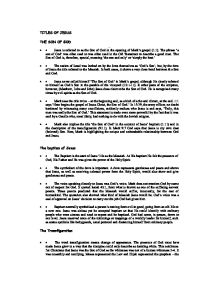 Titles of Jesus the son of God.

TITLES OF JESUS THE SON OF GOD * * Jesus is referred to as the Son of God in the opening of Mark's gospel (1:1). The phrase 'a son of God' was often used to was often used in the Old Testament to describe a good man. The Son of God is, therefore, special, meaning 'the one and only' or 'simply the best.' * * The nation of Israel was looked on by the Jews themselves as 'God's Son', but, by the time of Jesus the title referred to the Messiah. In both cases, it shows a very close bond between the Son and God. * * Jesus never called himself 'The Son of God' in Mark's gospel, although He clearly referred to himself as God's Son in the parable of the vineyard (12:1-11). In other parts of the scripture, however, (Matthew, Luke and John) Jesus does claim to be the Son of God. He is recognised many times by evil spirits as the Son of God. * * Mark uses the title twice - at the beginning and, as a kind of echo and climax, at the end. 1:1 says 'Here begins the gospel of Jesus Christ, the Son of God.' In 15:39, the army officer, no doubt hardened by witnessing many crucifixions, suddenly realises who Jesus is and says, 'Truly, this man was really the Son of God.' This statement is made even more powerful by the fact that it was said by a Gentile who, most likely, had nothing to do with the Jewish religion. * * Mark also implies the title 'the Son of God' in the account of Jesus' baptism (1:11) and in the description of the transfiguration (9:11). In Mark 9:7 God says that Jesus is my own dear (beloved) Son. Here, Mark is highlighting the unique and unbreakable relationship between God and Jesus. The baptism of Jesus * * The Baptism is the start of Jesus' life as the Messiah. ...read more.

Jesus warned them that they would suffer, but that their judge would be God. (The cup and baptism were sometimes used in the Old Testament as symbols of suffering and trials). Jesus also used the occasion to show that the Son of Man (the Messiah) was to be a servant to humanity even though he would eventually be the 'Lord of all'. This is the opposite of the world's values where the rulers 'lord it over' their subjects. Great Christians have a habit of being humble and serving, although this is not the same as being over self-critical and servile. A key question for Christians is what can I do for others? Not, what can others do for me? The prediction of the Passion - Mark 8:31-33 * * The title Son of Man for the Messiah showed a new approach and a new set of ideas. The other titles used for the Messiah were Son of God, and Son of David: these were associated with the idea of a great political leader. The title Son of Man contains two main ideas * * An association with the suffering servant - the Messiah would have to suffer for the sins of other people * * An association with Daniel's vision of the Sovereign Messiah: "I was gazing into the visions of the night when I saw, coming on the clouds of heaven, as it were a son of man. He came to the One most venerable and was led into his presence. On him was conferred rule, honour and kingship, and all peoples, nations and languages became his servants. His rule is an everlasting rule which will never pass away and his kingship will never come to an end" Daniel 7:13-14 * * Peter could not accept, at this stage, that the Messiah would suffer, and he tried to dissuade Jesus with the best of intentions. ...read more.

This was not idle curiosity at Jesus like Herod, but an overwhelming and urgent need to meet Jesus, and the faith that this Son of David would heal him. Maybe Bartimaeus did not fully understand that Jesus was a suffering servant Messiah, rather than a political hero, but he was drawn by faith to him, and he followed Jesus on the road. That road led to Jerusalem and danger. Christ never called anyone to an easy life. Entry into Jerusalem - Mark 11:1-11 * * This took place on what is known as Palm Sunday. Bethany and Bethphage were two villages at the top of the Mount of Olives. Most people expected the Messiah to appear suddenly from the Mount of Olives. * * It seems as if Jesus had arranged, beforehand, to have the colt collected. He chose a colt that had not been ridden before because this gave it religious significance; it was as if this previously un-ridden animal was carrying to Jerusalem and the Temple a sacrifice - Jesus himself. A donkey also symbolised peace. Jesus came as a peace making Messiah for all time, not as a conquering warrior for one generation only. * * The ordinary people became very excited because they thought that, at last, the Messiah had arrived. Unfortunately, they misunderstood what Jesus' spiritual aims were and expected a superhero to lead them to worldly victory. They word they kept shouting, Hosanna means save now. Many of them were quoting from Psalm 118:26 which describes the coming of the expected Messiah. * * The incident at Caesarea Philippi, the healing of Blind Bartimaeus and the entry to Jerusalem all point to Jesus as being the Messiah. Peter suddenly realises it at Caesarea Philippi; Bartimaeus persists in his efforts to get rid of his blindness through the Messiah - just as Christians today should persist in getting rid of their spiritual blindness through Christ; the entry to Jerusalem was a dramatic visual statement by Jesus as if he were saying, I am the Messiah, the Messiah of peace. ...read more.