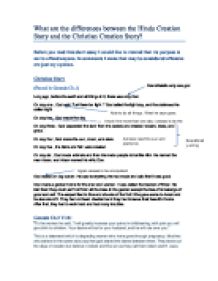 What are the differences between the Hindu Creation Story and the Christian Creation Story? Before you read this short essay I would like to remind that its purpose is not to offend anyone. In comments I make that may be considered offensive are just my opinion. Christian Story (Found in Genesis Ch.1) Long ago, before the earth and all things in it, there was only God. On day one , God said, "Let there be light ." God called the light day, and the darkness He called night. On day two , God made the sky. On day three , God separated the land from the waters and created flowers, trees, and grass . On day four ,God made the sun, moon, and stars. On day five , the birds and fish were created. On day six , God made animals and then He made people to be like Him. He named the man Adam, and Adam named his wife, Eve. God rested on day seven. He saw everything He had made and said that it was good. God made a garden home for the man and woman. ...read more.

God told them to eat abundantly therein. So this is their argument for god being omni-benevolent (despite him degrading pregnancy). And finally, some even say that it goes to show God is able to do all things. This whole world was his doing. The garden in which Adam and Eve were in was made by him. Flaws in the Christian Creation Story There are some flaws in this story: * Light was listed as appearing on day 1, but its source (the sun and stars) did not appear until day 4. Most creation scientists, who generally support the meaning of this creation story, have a solution to this puzzle. Many say that light initially came from God, before he created the sun and stars. * Birds were said to have appeared before other land animals. Palaeontologists, who support the theory of evolution, say that the fossil record shows the opposite order. Creation scientists discount this belief. * Vegetation is apparent on third day whereas the sun, which is necessary for sustaining vegetation, does not appear until the fourth day. * In the Bible, in Genesis, chapter 1, we read that God created light which He called day, and separated it from the darkness which He called night (see v. ...read more.

Even gods came after creation's day Verse 3 is a problem. Why is it a problem? Mainly, because it contradicts with verses 6 and 7. In verse six it says did god create it? Well, he can't have created it because it says the gods came after the creation day. How can you create something before you exist? It's just illogical to think so. Even gods came after creation's day Didn't gods create everything? How could they have created things before their existence? And were gods created? Gods are meant to be omni-present. Of course some people would say that everything has to have a beginning. But god is out of our understanding. He does not have to be compatible with logic and science. When and how did creation start? The Hindu Creation Story The Chandogya Upanishad 3:19:104 relates how the world was nonexistent, became existent, and then became an egg. After a year, the egg broke open and a silver part and a gold part emerged. The silver part became the Earth and the gold part became the sky. The various parts of the egg became the features of the heavens and the Earth. Many see in this an analogy to the Big Bang Theory. ...read more.