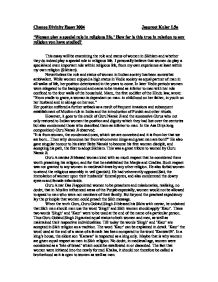 'Women play a special role in religious life.' How far is this true in relation to any religion you have studied?

Chance Divinity Essay 2004 Jaspreet Kular L5a 'Women play a special role in religious life.' How far is this true in relation to any religion you have studied? This essay will be examining the role and status of women in Sikhism and whether they do indeed play a special role in religious life. I personally believe that women do play a special and even important role within religious life, from my own experience at least within my own religion (Sikhism). Nevertheless the role and status of women in Indian society has been somewhat ambivalent. While women enjoyed a high status in Vedic society as equal partner of man in all walks of life, her position deteriorated in the years to come. In later Vedic periods women were relegated to the background and came to be treated as inferior to man with her role confined to the four walls of the household. Manu, the first codifier of the Hindu law, wrote: "From cradle to grave, a woman is dependant on man- in childhood on her father, in youth on her husband and in old age on her son." Her position suffered a further setback as a result of frequent invasions and subsequent establishment of Muslim rule in India and the introduction of Purdah and other rituals. However, it goes to the credit of Guru Nanak Ji and the successive Gurus who not only restored to Indian women the ...read more.

In a king's house, the eldest son 'Kanwar' is respected as a king only. Maybe that is why women are given equal respect as men in Sikh religion. No doubt, in medieval age, women were considered as a 'bite of bread' which could be swallowed in or discarded. The fact that women were initiated into the newly formed Khalsa, it should not therefore be called a brotherhood as it is open to women as well as men. There were no women Gurus, it is true, but we must remember the conventions of the day which must have constrained the Gurus, and note also that the Gurus' wives often played significant roles in the development of the Panth. Many women gave their contribution to Sikhism. This essay will now highlight some of these women and their unique contribution to Sikhism. * Bebe Nanaki is the first women to accept the religion started by Guru Nanak Ji and she is considered as one of the prominent women of the world. Bebe Nanaki helped her brother monetarily for buying his first Rahab for recitation of Kirtan. * Mata Sulakhani looked after her sons carefully and waited for her husband during religious journeys of Guru Nanak Ji. She never put any obstacles in the missionary work of her husband. Rather she agreed to what he said. ...read more.

The Sikhs call a wife as Ardhangi (better half). There is no restriction on their education or movements as long as they follow the Guru's instructions. It is on record that Guru Amar Das appointed women as missionaries of the Sikh faith. Guru Tegh Bahadur once remarked that women of Amritsar were nearer to God than men because they 'accepted God's will readily' as compared to their counterparts who were 'jealous and cunning.' If the role of women in Sikhism is compared with other religions the following can be said. The belief that women were naturally "weaker" and "inferior" to men was also sanctioned by god-centred religions such as Christianity. In the Bible, for instance, God placed Eve under Adam's authority, and St Paul urged Christian wives to be obedient to their husbands. Similarly, according to traditional Hindu custom, a virtuous woman is considered to be one who worships her husband (pathivratha) and derives great power from her virtue to protect her husband and herself. As for Judaism, although Orthodox Judaism sets limits on the religious and social roles of women in the Jewish community, reformed Judaism allows women to participate on equal terms in synagogues and, in many instances, to hold high office within the community. For example, from 1969 to 1974 Prime Minister Golda Meir held the highest public office in Israel, and in September 1972 Sally J. Preisand became the first female rabbi in the history of Judaism. ...read more.