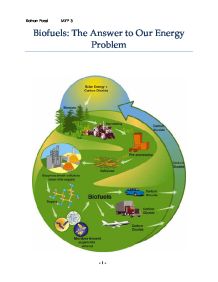 Biofuels: The Answer to Our Energy Problem Biofuels Biofuels are fuels made from plants or animals matters. They include * Wood, wood chippings and straw * Biogas(methane) from animals and plants matter * Ethanol, diesel and other fuels made from plants matter and waste oil Ethanol and diesel are mainly made from the crops such as corn, rapeseed and sugarcane. They are called biodiesel. These are now being used in many MEDC's for their cars because when petrol and diesel are burnt they emit lots of carbon dioxide into the air and causes lots of pollution and global warming. Great pioneers such as Henry Ford and Rudolph Diesel designed cars which could be compactable with Biofuels. Before World War 2 the UK and Germany sold Biofuels which were mixed with petrol or diesel made from crude oil. This biodiesel is made from fermentation and other various chemical processes. The MEDC's have made the access to Biofuels because it the only way they have found for reducing the greenhouse gases compared to convectional transport fuels and as it is a MEDC they have enough place and money for taking over this project. ...read more.

There were a few research and case studies done where they could come up with a solution. According to the case study the rapidly growing biofuel market will keep farm products prices high over the next decade and has also estimated that the prices will rise up by between 20 % and 50 % by 2016. The current problem that many people are facing are that it is very expensive compared to the normal fuel because there are many forest that are being cut down and making of biofuel has to undergo many chemical processes. There has also been a shortage of land for making this fuel and so it has to be made in one place and then transferred all over the country which is obviously making it more expensive by the land shortage and transportation of that fuel. As I went to the website http://www.guardian.co.uk/environment/2008/jan/14/biofuels.energy and found that there was a report which said that biofuels made from corn and sugar cane could have a greater environmental impact than burning fossil fuels which could cause deforestation and then soil erosion, causing a major disaster to the small plants and animals by destroying their habitat. ...read more.

In a way this also helps the poor people to find themselves a good job as this will become very popular and then the farmers will be able to earn almost twice as much as they used to earn before. It will * Reduce global warming * Utilize waste products * Create a balanced carbon cycle in the atmosphere * Overcome the problem of shortage of oil from fossils * Reduce waste product * Burn clearly * Provide more job to the poor people * It is renewable and non-toxic So due to all these advantages, USA and Europe are wanting to develop this as soon as possible as it is not very polluting and reduces some threats of harmful gases and global warming. They are wanting to develop this method because it is renewable. I derives from plants, gets used in the vehicles and releases CO2 which later gets used by the plants during photosynthesis. It gets back from where it had started and does the same circle again and again. So to conclude I would say that biofuels should be developed as it is solving one of the major environmental problems of our daily life. ...read more.