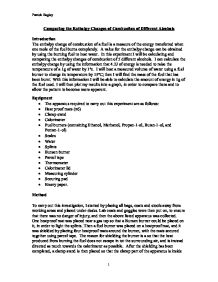 Comparing the Enthalpy Changes of Combustion of Different Alcohols.

Comparing the Enthalpy Changes of Combustion of Different Alcohols Introduction The enthalpy change of combustion of a fuel is a measure of the energy transferred when one mole of the fuel burns completely. A value for the enthalpy change can be obtained by using the burning fuel to heat water. In this experiment I will be calculating and comparing the enthalpy changes of combustion of 5 different alcohols. I can calculate the enthalpy change by using the information that 4.2J of energy is needed to raise the temperature of a 1g of water by 1�c. I will heat a measured volume of water using a fuel burner to change its temperature by 15�C; then I will find the mass of the fuel that has been burnt. With this information I will be able to calculate the amount of energy in 1g of the fuel used. I will then plot my results into a graph, in order to compare them and to allow the pattern to become more apparent. Equipment * The apparatus required to carry out this experiment are as follows: * Heat proof mats (x6) * Clamp stand * Calorimeter * Fuel burners (containing Ethanol, Methanol, Propan-1-ol, Butan-1-ol, and Pentan-1-ol) * Scales * Water * Splints * Bunsen burner * Parcel tape * Thermometer * Calorimeter lid * Measuring cylinder * Scouring pad * Emery paper. ...read more.

When the fuel burner was being carried to and from the scales, extra care was taken to make sure that it was not dropped and broken. Stock bottles of alcohol were kept away from naked flames so they could not catch light. Fair Test There were a number of things we had to control to make sure our experiment was a fair test. To begin with, in our groups which we worked in to gather the data, we allocated each other specific jobs, so that we became 'specialized' and so even if there were mistakes in our technique, the mistakes were repeated throughout all the experiments and so the end result should be the same, reducing the chance of overall error and inaccuracy. We also used the same calorimeter each time we did our experiments. This was because a slight difference in the weight of each calorimeter was noticed, and therefore a different density; which would affect their ability to conduct heat, and so the same calorimeter would need to be used each time to make the experiment a fair test. We also noticed that different scales could give different results, and so we used the same set of scales each time. The water used was always taken from the tap, and so although it contained impurities, all the experiments were performed using this water, so the accuracy of the experiment was not at risk. ...read more.

With less bonds being formed than broken then energy is given off, and if the ratio is increased further, then even more energy is given off. Evaluation There were a number of sources of error in my experiment. For example, much of the heat given from the fuel would have been lost because the calorimeter was placed 13cm away from the heat source, and although draft excluders were used some heat will have escaped. Also, because we were using alcohols, windows had to be opened for ventilation, which caused drafts which stopped all the energy being used to heat the water. It was left to human judgement, when the temperature had reached 15�C above the starting point, and so there could be error in the judgement. Another problem would be the build up of soot on the bottom of the calorimeter. Although this was cleaned after every run, it still became insulation to the water, stopping it from heating slightly. Also, the calorimeter which was used was heated slightly, and so energy was wasted by the heating of the calorimeter. The errors could have been reduced if an electric thermometer were used, and so a more accurate reading could have been gathered. Also, if the experiment was performed under more controlled conditions, where no energy could escape from heating the water then the experiment would give much more accurate results. Patrick Begley 2 ...read more.