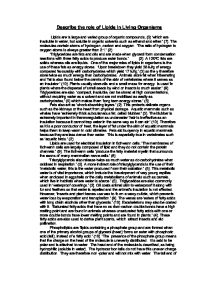 Describe the role of Lipids in Living Organisms

Describe the role of Lipids in Living Organisms Lipids are 'a large and varied group of organic compounds, (3) 'which are insoluble in water, but soluble in organic solvents such as ethanol and ether.' (7). The molecules contain atoms of hydrogen, carbon and oxygen. 'The ratio of hydrogen to oxygen atoms is always greater than 2:1.' (2) 'Triglycerides are fats and oils and are made when glycerol form condensation reactions with three fatty acids to produce ester bonds.' (2). At 20�C fats are solids whereas oils are liquids. One of the major roles of lipids in organisms is the use of these fats as energy stores. 'Upon breakdown they yield 38 kJ/g of energy compared favourably with carbohydrates which yield 17 kJ/g,' (3) so they therefore store twice as much energy than carbohydrates. Animals store fat when hibernating and 'fat is also found below the dermis of the skin of vertebrates where it serves as an insulator.' ...read more.

(5). This metabolic water is of vital importance, which include the 'development of very young reptiles when enclosed in eggshells or the daily metabolisms of animals such as camels, which live in habitats where water is scarce.' (5). Triglycerides are also commonly used in 'waterproof coverings.' (2). Oil coats animal skin to waterproof it along with fur and feathers so that water is repelled and the animal's insulation is not affected. However, 'insects and plant leaves use wax to form a waxy cuticle, which prevents water loss by evaporation and transpiration.' (9). The waxes are 'esters of fatty acids with long chain alcohols other than glycerols.' (10). Exoskeletons may also be coated with it. 'Saturated fatty acids that have no carbon-carbon double bonds have a high melting point and are found in animals whereas unsaturated fatty acids with one or more double bonds have lower melting points and are found in plants.' (4). These fatty acids are also used to derive plant scents, which attract insects and aid pollination. ...read more.

(5) 'Steroids are lipids whose molecules contain four rings of carbon and hydrogen atoms with various side chains.' (9). Steroids are common in all organisms, mainly as hormones. 'Phosphatidyl inositol (a phospholipid lacking the group esterified to the phosphate) acts to release inositol trisphosphate and diacylglycerol as intercellular second messengers to hormones.' (1). Terpenes are common in plants as pigments whereas cholesterol is the most common in humans. 'From cholesterol are made the bile salts, the sex hormones and the hormones of the adrenal cortex,' (5) 'aldosterone and cortisone.' (10). 'A steroid closely related to cholesterol occurs in the human skin and is converted to vitamin D by the ultraviolet rays in the sunlight.' (5) Lipids also 'lower the surface tension in the air - breathing vertebrates to make breathing possible.' (11) Therefore evolution development has facilitated the compartmentalisation of cells with the aid of phospholipids it can be considered as a vital compartment, which has enabled complex development and variation with birds fro example. Such variation as buoyancy, insulation etc are brought about by triglycerides. ...read more.