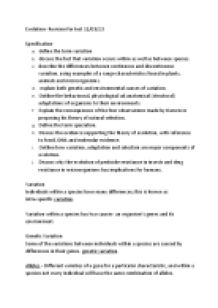 ﻿Evolution- Revision for test 11/03/13 Specification- 1. define the term variation 2. discuss the fact that variation occurs within as well as between species. 3. describe the differences between continuous and discontinuous variation, using examples of a range characteristics found in plants, animals and microorganisms. 4. explain both genetic and environmental causes of variation. 5. Outline the behavioural, physiological ad anatomical (structural) adaptations of organisms to their environments. 6. Explain the consequences of the four observations made by Darwin in proposing his theory of natural selection. 7. Define the term speciation. 8. Discuss the evidence supporting the theory of evolution, with reference to fossil, DNA and molecular evidence. 9. Outline how variation, adaptation and selection are major components of evolution. 10. Discuss why the evolution of pesticide resistance in insects and drug resistance in microorganisms has implications for humans. Variation Individuals within a species have many differences; this is known as intra-specific variation. Variation within a species has two causes- an organism?s genes and its environment. Genetic Variation Some of the variations between individuals within a species are caused by differences in their genes- genetic variation. Alleles ? Different varieties of a gene for a particular characteristic, and within a species not every individual will have the same combination of alleles. In sexually reproducing organisms, alleles are shuffled each time a new organism is produced. In plants and animals, there are two sets of chromosomes in the nucleus of each cell, one set from the male parent and one set from the female parent. Each nucleus thus contains two copies of each gene. These copies may e the same, or they may be different. When gametes are being formed, cell division by meiosis mixes up these sets of chromosomes, so that each sperm or egg that is made contains different mixture of alleles. There is even more opportunity for genetic variation when fertilisation occurs, because any male gamete can fuse with any female gamete. ...read more.

A large population of penicillin- resistant Staphylococcus would result. Such antibiotic-resistant strains of bacteria are constantly appearing. One important one is MRSA- methicilin-resistant Staphylococcus aureus. MRSA bacteria normally harmless is capable of infecting people whose immune systems are not strong- perhaps because they have another illness. Many people who were already ill have picked up MRSA infections whie in hospital and have dies as a result. MRSA bacteria has become resistant to almost all antibiotics, thus infection are very difficult to treat. By using antibiotics, we change the environment in which species of bacteria are living. We change the selection pressures. Individual bacteria that have genes that make them better adapted to the new environment win the struggle for existence, and pass on their advantageous genes to their offspring. The more we use antibiotics, the greater the selection pressure we exert on bacteria to evolve resistance to them. Alleles for antibiotic resistance often occur on the plasmid- small circles of DNA other than on a ?chromosome.? The plasmids can thus be transferred from one bacterium to another, and even between different species. As a result, it is possible for resistance to a particular antibiotic to arise in one species of bacterium and be passed to another. Insecticide Resistance Just as natural selection has led to the development of populations of bacteria that are resistant to antibiotics, so it has led to the development of resistance to insecticides in some populations of insects. There are many kind of insects that we would like to see less of. E.g. mosquitoes transmit malaria which is a major cause of death in tropical and subtropical parts of the world. Insects also eat our food stores. They damage crops. A wide range of insecticides has been developed in an attempt to keep insect populations to a reasonably low level. A main insecticide used in the world is aimed at eradicating insects that damage cotton plants. ...read more.

The DNA evidence suggests that mammoths and Asian elephants diverged around 440 000 years later. As a result, mammoths are more closely related to Asian elephants than to African elephants. We can also find out a lot about the evolutionary relationships between organisms that are alive today by comparing their DNA. There are great similarities between the DNA base sequences of chimpanzees and in ourselves. The simplest explanation for this is that we have both evolved form a common ancestor. However, DNA analysis can often give provide unexpected results. E.g. many different animals have eyes, however they can be so different in structure that it has been assumed that eyes have evolved separately in different groups. Eyes of insects seems to have little in common with the structure of the eyes of molluscs or vertebrates. The simplest explanation is that eyes of one type evolved in an ancestral line leading to insects, whereas eyes of a different type evolved separately in the line leading to vertebrates. The fruit fly has a gene called ey that controls the development of eyes. It has been realised that the base sequence of this genes is similar to that of a gene called Pax-6 which controls the development of eyes in vertebrates. Researchers tried out the effects of Pax-6 from a mouse in fruit fly cells. They found that the fruit fly grew and eye in its wing (where the gene was injected) and it was a Drosophila (fruit fly) eye not a mouse eye. It has been found that Pax-6 can also bring about the development of an eye in other organisms such as squid (mollusc) It seems clear that there is a common origin of eyes in all animals, despite their very different features. The fact that such different organisms all have a similar sequence of DNA bases that controls the development of their eyes is very strong evidence for an evolutionary relationship between them. This is an example of an ancient gene- it has been recycled and re-used in many different organisms, continuing to control the development of strikingly different features. ...read more.