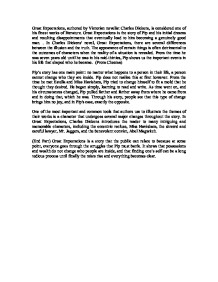 Great Expectations, authored by Victorian novelist Charles Dickens, is considered one of his finest works of literature

Great Expectations, authored by Victorian novelist Charles Dickens, is considered one of his finest works of literature. Great Expectations is the story of Pip and his initial dreams and resulting disappointments that eventually lead to him becoming a genuinely good man. . In Charles Dickens' novel, Great Expectations, there are several differences between the illusion and the truth. The appearance of certain things is often detrimental to the outcomes of characters when the reality of a situation is revealed. ...read more.

Pip does not realize this at first however. From the time he met Estella and Miss Havisham, Pip tried to change himself to fit a mold that he thought they desired. He began simply, learning to read and write. As time went on, and his circumstances changed, Pip pulled farther and farther away from where he came from and in doing that, which he was. ...read more.

In Great Expectations, Charles Dickens introduces the reader to many intriguing and memorable characters, including the eccentric recluse, Miss Havisham, the shrewd and careful lawyer, Mr. Jaggers, and the benevolent convict, Abel Magwitch. (End Part) Great Expectations is a story that the public can relate to because at some point, everyone goes through the struggles that Pip must battle. It shows that possessions and wealth do not change who people are inside, and that finding one's self can be a long tedious process until finally the mists rise and everything becomes clear. ...read more.