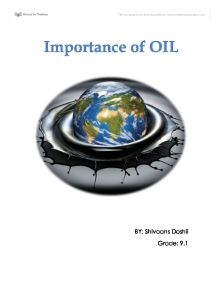 Hydrocarbons and the importance of oil as a power source.

> Good source of energy. Can be burnt to get energy, and you can do anything else to it to get energy. That's the reason oil is so much in demand. > Good fuel for internal combustion engines. The main reason why it is used in cars to make them move. Disadvantages > Non-renewable source of energy. This means that we are going to run out of oil after some time as it takes millions of years to form. > Causes pollution. When burnt, causes a lot of pollution. A main cause of global warming. > Carbon monoxide emissions. When burnt, it lets out carbon monoxide, which is harmful for the environment. When a ship carrying oil sinks or is damaged, it can cause a big problem. To start off with, people loose a lot of oil. This is because as ships carry a lot of oil and it sinks, so oil is lost. Then also, life in the sea is also harmed, the living things inside the water such as fish, suffer. Then a lot of money is lost as the mess has to be cleaned up. The people who had to receive oil for any purpose would not be able to complete their work on time, so that place might suffer too, as they won't have enough oil. ...read more.

This is a fairly simplistic report, and does not go into much detail. It does however give a good argument against non-renewable resources like crude oil.

Overall, this piece of work is 3 stars out of 5