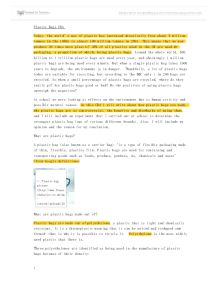 In this CDA I will write about how plastic bags are made, why plastic bags are so controversial, the benefits and drawbacks of using them, and I will include an experiment that I carried out at school to determine the strongest plastic bag (out of various

Plastic Bags CDA Today, the world's use of plastic has increased drastically from about 5 million tonnes in the 1950s to almost 100 million tonnes in 2001. This means that we now produce 20 times more plastic! 35% of all plastics used in the UK are used for packaging, a proportion of which, being plastic bags. Around the whole world, 500 billion to 1 trillion plastic bags are used every year, and shockingly 1 million plastic bags are being used every minute. But when a single plastic bag takes 1000 years to degrade, the environment is in danger. Thankfully, a lot of plastic bags today are suitable for recycling, but according to the BBC only 1 in 200 bags are recycled. So when a small percentage of plastic bags are recycled, where do they really go? Are plastic bags good or bad? Do the positives of using plastic bags outweigh the negatives? At school we were looking at effects on the environment due to human activity and possible natural causes. In this CDA I will write about how plastic bags are made, why plastic bags are so controversial, the benefits and drawbacks of using them, and I will include an experiment that I carried out at school to determine the strongest plastic bag (out of various different brands). Also, I will include my opinion and the reason for my conclusion. What are plastic bags? A plastic bag (also known as a carrier bag) 'is a type of flexible packaging made of thin, flexible, plastics film. Plastic bags are used for containing and transporting goods such as foods, produce, powders, ice, chemicals and waste' (from Google definitions) What are plastic bags made out of? Plastic bags are made out of polyethylene, a plastic that is light and chemically resistant. It is a thermoplastic meaning that it can be melted and reshaped once formed- that is why it is possible to recycle it. ...read more.

Furthermore, I also picked out anomalous data. The anomalous data could have happened because of something invalid in the experiment, such as human error. I may have dropped the weight into the plastic bag at higher height which would have increased the impact onto the plastic bag and therefore weakened it more. The ways that I made my experiment valid is by using bags that were brand new and at the same type of age. However, I may have mixed some of the bags up with older bags, so that would have weakened the bag more and therefore caused for an earlier breakage than the other bags. This could have occurred with the Somerfield bags as they took a smaller amount of mass compared to Waitrose and Tesco (Somerfield took 11.1kg compared to 12.7 kg of Waitrose and also Tesco's mass of 11.5kg- with the low anomaly included). Also I was the same person who dropped the weights into the bag- this would have affected the results because some people may drop the weights at different heights depending on their own height. It was also crucial to drop each mass with the same difference of time in between each drop every time, with each bag. This is because if the mass is left in the bag for some time, the bag weakens more and more. That is also what could have caused the anomalous data. Also another way I made it reliable is by having only one controlled variable, which was the brand of plastic bag (the supermarket) A way I could extend my research is by using paper bags instead of plastic bags so that I could see whether it would be more convenient for customer to have paper bags, if they are stronger. In addition, I could also look at other supermarkets such as Aldi, Morrisons, Asda and The co-operative and use their plastic bags in the same experiment and then compare the results with the other results I have. ...read more.

Also, the people that are being blamed for this, shouldn't be the supermarkets. If anything supermarkets are trying their hardest on encouraging the customer to use packaging other than plastic bags. Many are charging on each plastic bag, introducing a bag for life, giving extra 'points' for people who re use their bags and providing the option for home delivering groceries without the plastics bags. The truth is, supermarkets aim what they provide for the target audience. The target audience is us. We are to blame for the use of plastic bags in the country as we are the ones who demand for it. When we decide that we will not use plastic bags anymore, that is when shops will stop providing it. Glossary Polyethylene- 'a lightweight thermoplastic; used especially in packaging and insulation' Thermoplastic- 'having the property of softening or fusing when heated and of hardening and becoming rigid again when cooled; "thermoplastic materials can be melted again and cooled time after time without undergoing any appreciable chemical change"' Branching- replacing the polymer chain with other forms or variations of the monomer Polymer- 'a naturally occurring or synthetic compound consisting of large molecules made up of a linked series of repeated simple monomers' Monomer- 'a simple compound whose molecules can join together to form polymers' Degrade- 'lower the grade of something; reduce its worth' Landfills- 'A landfill, also known as a dump or rubbish dump (and historically as a midden), is a site for the disposal of waste materials by burial and is the oldest form of waste treatment' Habitat- 'he type of environment in which an organism or group normally lives or occurs; "a marine habitat"; "he felt safe on his home grounds"' Pollution- 'undesirable state of the natural environment being contaminated with harmful substances as a consequence of human activities' Atmosphere- 'the weather or climate at some place; "the atmosphere was thick with fog"' Petrochemicals- 'Petrochemicals are chemical products derived from petroleum. Some chemical compounds made from petroleum are also obtained from other fossil fuels such as coal or natural gas, or renewable sources such as corn or sugar cane. ...read more.

A lot of research has clearly gone into this paper. It gives both sides of the argument as to whether plastic bags should be used. The experiment was performed with a low reliability and the results were shown in a poor manner. Not much actual science is discussed.
This piece of work is a 2*