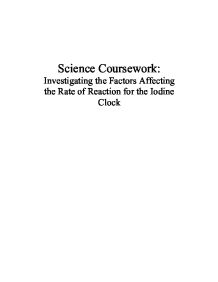 Science Coursework: Investigating the Factors Affecting the Rate of Reaction for the Iodine Clock Contents Introduction Scientific Theory Strategy (Plan) Results Analysis Evaluation References Introduction I am going to investigate how reaction rates in the iodine clock are affected. To do this I will consider the four possible independent variables: concentration, surface area, temperature and catalysts. I will then choose one factor and carry out a number of experiments, only changing that variable, and record the reaction speed. This will show how the reaction speed differs when the variable is altered. I predict that as the concentration of the Hydrogen Peroxide increases, the reaction rate will decrease. I think this because if there are more hydrogen peroxide particles to react with the other particles, the reaction will happen sooner. Theory The theory of the experiment is partly explained by the collision theory. The reaction can only take place when particles collide with enough energy. If there is not enough energy the reaction will not happen and the particle will bounce away again. The rate of a reaction depends on the number of successful collisions in a given amount of time. ...read more.

My results were very consistent and showed what I expected, so they are likely to be accurate, meaning my conclusions are likely to be accurate. I had one outlier, which was because I used a different hydrogen peroxide solution. I didn't have any other outliers which suggests the method and apparatus was accurate. However in one experiment it turned yellow, instead of the purple colour that occurred in every other experiment. I don't know why this was, but it is possible that I included the wrong amount of one of the chemicals. As the time was similar to the times recorded in the other experiments, I still included this in my results. Another way in which I could have improved my investigation would have been to investigate more than one factor and then compare the results. The title of the investigation was "Investigating the Factors Affecting the Rate of Reaction for the Iodine Clock" so by considering more than one variable I could have investigated this further. I would still have been unable to investigate surface area or catalysts but I could have carried out similar experiments to the ones I did, altering the temperature each time. This way I could have seen if the temperature affects the reaction more or less than the concentration. ...read more.