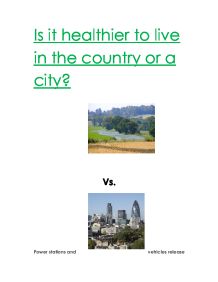 Is it healthier to live in the country or a city?

Is it healthier to live in the country or a city? Vs. Power stations and vehicles release pollutants into the atmosphere when they burn fossil fuels. These affect the environment. The only way to reduce carbon dioxide emissions is to burn fewer fossil fuels. Other pollutants can be reduced by cleaning the waste gases generated by power stations and vehicles. Carbon dioxide is a greenhouse gas. Increasing amounts of it in the atmosphere is helping to cause global warming. Particulate carbon, sulphur dioxide and nitrogen dioxide can make it difficult to breathe. It is unlikely they cause asthma, but they may trigger an attack. Acid rain - from sulphur dioxide and nitrogen dioxide - is harmful to the environment. ...read more.

A lot of people may think that country life leads to a much healthier life due to less pollution, is this speculation correct? Many people believe that country life is a lot healthier than living in the a city because people assume that there is much less pollution, however if we think about it more carefully there are a huge amount of cars which of course have to go on further journeys to the shops and towns etc. , tractors and even factories all of these things have a massive carbon footprint and not to mention the houses in the country, of course they have big carbon emissions as well. Crop sparing also takes place in the country, this releases chemicals and pesticides into the environment. ...read more.

people don't need to use a ca at all due to public transport and bikes * Less farm land therefore less chemicals and pesticides used * People sharing houses so less carbon emissions. Page 2... I think I can trust my evidence because it backs up both sides of the argument and it is written in an article which explores being eco- friendly. I have closely compared both sides of the argument and in my opinion country life is healthier than city life because there is far less pollution and more eco friendly advantages that city life has. However on the other hand I do understand why people think city life is better for them. I think the city should take some ideas from the country in order to make city life even healthier. ...read more.