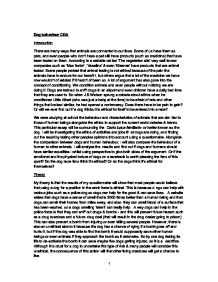 Dog behaviour CDA Introduction There are many ways that animals are connected to our lives. Some of us have them as pets, and even people who don't have a pet still have products (such as medicine) that have been tested on them. According to a website called 'The vegetarian site' very well known companies such as 'Max factor', 'Vaseline' & even 'Kleenex' have products that are animal tested. Some people protest that animal testing is not ethical because of the pain the animals have to endure for our benefit, but others argue that a lot of the medicine we have now wouldn't of existed if it hadn't of been so. A lot of argument has also gone into the concept of conditioning. We condition animals and even people without noticing we are doing it. Dogs are trained to sniff drugs in an airport and even children have a daily bed time that they are used to. So when J.B Watson sprung a debate about ethics when he conditioned Little Albert (who was just a baby at the time) to be afraid of rats and other things that looked similar, he had opened a controversy. Does there have to be pain to gain? Or will we ever find out if a dog thinks it is ethical for itself to be entered into a race? We were studying at school the behaviour and characteristics of animals that are similar to those of human beings alongside the ethics to support the current world debates & trends. This particular essay will be surrounding the Canis lupus familiaris- or better known as the dog. I will be investigating the ethics of activities and jobs that dogs are doing, and finding out the result by taking other peoples opinions into account using a questionnaire. Alongside the comparison between dogs and human behaviour, I will also compare the behaviour of a human to other animals. ...read more.

As Ivan Pavlov studied the secrets behind the digestive system, he was also interested to find out the signals that cause animals to salivate. Humans and animals salivate to break up food that we are eating, that is why Ivan was so interested when the dogs in the lab kept drooling when there was no food in sight. He later discovered that when the food was served to the dogs, the person serving it was always wearing a lab coat. So when a lab coat was in sight the dog salivated automatically. This is because the dog was conditioned to salivate every time(salivating being the dog's conditioned response) he saw a lab coat- which was the conditioned stimulus; the dog related the lab coat to the bringing of food. Ivan Pavlov tested his theory in his own experiment; the experiment was just like the diagram below. Before the experiment had started, the food was an unconditioned stimulus and the salivation was an unconditioned response. Then before conditioning Ivan got a tuning fork- which was a neutral stimulus and made a loud noise next to the dogs. The dogs did not respond (no conditioned response) and did not salivate. During the conditioning, every time Ivan fed the dogs he made a noise with the tuning fork just before, the dogs salivated only because of the food- but still the response was unconditioned. Ivan repeated this process several times. After the conditioning he made a noise with the tuning fork (which was now the conditioned stimulus) and didn't show the dogs any food, but remarkably the dogs salivated and that was its new conditioned response. The dog salivated without the food being presented to it because it related the noise of the tuning fork to the food being brought. As if the dogs thought that because they were fed straight after the noise several times they would continue to be fed like that (now a normal way to be fed according to the dogs). ...read more.

My opinion is that dogs should be conditioned to do jobs in the workforce. This is because they have more sensitive scent receptors than humans and can sniff out things from hundreds of metres away than we would 20 centimetres away and we rely on them to make the world more safer. The most interesting question I asked was: if dogs believe that having a dog as a pet is ethical? I believe that it was the most interesting question because It is the question that can not really be answered. We would never really know what a dog believes and that is why I wanted to get peoples opinions. Most of the people believed that dogs do believe that it is ethical, with one person saying answering 'maybe'. This was because they believe that dogs have shelter, food, a name and we take care of them. I also believe that dogs do think it is ethical for themselves because of the reasons that the people I questioned believed too. Dogs are taken care of by us, and most of the time that we put animals and dogs at risk is for the good of it. But, like every other specie there is a majority that are abused, maybe for the enjoyment of it or maybe for punishment. I could conclude however, that animals have helped humans, more than humans have helped them. We give animals shelter, food and a name. But they have saved many of us. They saved us by putting up with the experimenting on them- to help us with medicines. They helped us by making our airports safer by sniffing out drugs and maybe even bombs. They helped us by protecting our buildings and some of our homes by guarding them. They also helped the blind people walk and gave the disabled a friend that can entertain them when feeling low. So without animals the world would be a completely different place than today. A far worse place. ...read more.

*****
A very detailed account of a questionnaire conducted to investigate the ethics of dog use by humans. A wide variety of issues are thoughtfully and carefully discussed.