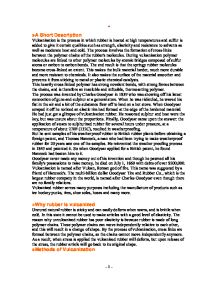 The Vulcanization of Rubber

The Vulcanization of Rubber "A Short Description Vulcanization is the process in which rubber is heated at high temperatures and sulfur is added to give it certain qualities such as strength, elasticity and resistance to solvents as well as moderate heat and cold. The process involves the formation of cross-links between the polymer chains of the rubber's molecules. During vulcanization polymer molecules are linked to other polymer molecules by atomic bridges composed of sulfur atoms or carbon to carbon bonds. The end result is that the springy rubber molecules become cross-linked an extent. This makes the bulk material harder, much more durable and more resistant to chemicals. It also makes the surface of the material smoother and prevents it from sticking to metal or plastic chemical catalysts. This heavily cross-linked polymer has strong covalent bonds, with strong forces between the chains, and is therefore an insoluble and infusible, thermosetting polymer. The process was invented by Charles Goodyear in 1839 who was showing off his latest concoction of gum-and-sulphur at a general store. When he was ridiculed, he waved his fist in the air and a bit of the substance flew off to land on a hot stove. When Goodyear scraped it off he noticed an elastic rim had formed at the edge of the hardened material. ...read more.

A typical vulcanization temperature for a passenger tire is 10 minutes at 170 degrees C. This type of vulcanization is an example of the general vulcanization method named compression molding. The rubber article is intended to adopt the shape of the mould. Other methods, for instance those used to make door profiles for cars use hot air vulcanization or microwave heated vulcanization. "About Vulcanization Vulcanization is considered to be irreversible and its products are similar in properties to other thermosets. Vulcanized rubber compounds are grouped with thermoset materials, which do not melt on heating, unlike thermoplastic materials (polyethylene and polypropylene). Usually, the actual chemical cross-linking is done with sulfur, but other technologies, including 'peroxide-based systems' are used. The process of vulcanization consists typically of the cure agent itself, (sulfur or peroxide), together with accelerators, like zinc oxide and stearic acid and antidegradants. To prevent vulcanization starting too early, retarding agents are added. Antidegradants are used to prevent degradation by heat, oxygen and ozone. There are areas which attract sulfur atoms along the rubber molecule. These are called 'cure sites', and are generally places with an unsaturated carbon=carbon bond, like in polyisoprene, the basic material of natural rubber, and in styrene-butadiene rubber (SBR), the basic material for passenger tires. The active sites are allylic hydrogen atoms (hydrogen atoms connected to the first saturated carbon atom connected to the carbon-carbon double bond). ...read more.

An accelerator speeds up the cure reaction, while a retarder delays it. In the subsequent century, various chemists have developed other accelerators, and so-called ultra-accelerators, that make the reaction very fast, and are used to make most modern rubber goods. "Devulcanization Recycling rubber is difficult because it has to be devulcanized without compromising its desirable properties. Devulcanization involves treating rubber in granular form with heat and/or softening agents to restore its elastic qualities, so the rubber can be reused. Several experimental processes have achieved certain degrees of success in the laboratory, but have been less successful when scaled up to commercial production levels. Recycling rubber begins with the collection and shredding of discarded tires resulting in a granular material. All the steel and reinforcing fibers are removed and after a secondary grinding, the resulting rubber powder is ready for product remanufacture. However, the manufacturing applications that can utilize this inert material are restricted to those which do not require its vulcanization. Devulcanization begins with the delinking of the sulfur molecules from the rubber molecules, facilitating the formation of new cross-links. Two main rubber recycling processes have been developed: the modified oil process and the water-oil process. The reclaimed rubber from these processes has altered properties and is unsuitable for use in many products, including tires. Typically, these various devulcanization processes have failed to result in significant devulcanization, have failed to achieve consistent quality, or have been extremely expensive. -Elisha George SR 4E ?? ?? ?? ?? - 1 - ...read more.