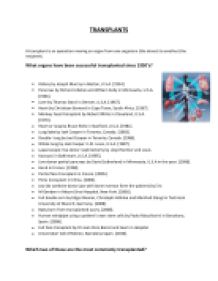 What are the advantages of using animals as organ donors for humans? 1. Animals are readily available, this means that the rate of people on the transplant list will decrease. 2. It will save the government money. 3. Easily make up for shortage. 4. This could mean saving for NHS, more taxes to help pay for more research. 5. No social damages as you know your relatives/friends organs are in someone else?s body. (www.yahoo.com) What are the disadvantages of using animals as organ donors for humans? 1. There is a small possibility that there could be a transfer of pig or primates diseases with the transplant to the human which could seriously harm the patient and could even cause a large epidemic 2. Animals have rights. Many believe that animals too have rights, just like humans, and therefore have the right to live without fear of murder and not be killed of the purpose of helping humans by providing organs for transplants and therefore we should not exploit the animals for our benefit. 3. Scientists are ?playing God? by genetically modifying the animals, and as said with argument on GM crops, we have yet to know what affect this will have on the environment and future generations. (www.yahoo.com) In my opinion, I think humans should not use other animals for organ transplant because some animals will be endangered and may later become extinct. Moreover humans could also be at risk because animal diseases could spread to humans because certain viruses could be introduced into the recipient?s body. ...read more.