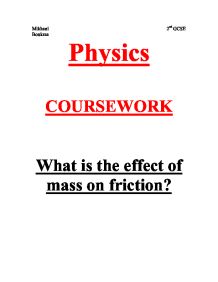 What is the effect of mass on friction?

What is the effect of mass on friction?

To conduct this experiment, certain materials will be required. These include the following: 2 force meters (one that measures forces up to 5 Newtons and one that measures forces up to 10 Newtons), a mass i.e. a block of wood of about 15cm3, a table or any smooth surface, a strip of slightly grainy sandpaper and another strip of more grainy sandpaper. The experiment will be set up as shown below (fig 1).

Dynamic Friction: For the dynamic friction experiment, the force of friction will be read off the force meter. This is due to Newton’s second law stating that Fnet = ma. When the block is being pulled along at constant speed, the acceleration is 0 so Fnet = 0. Therefore P = F and so the force shown on the force meter is equal to the frictional force.

A hook should first be placed into the block of wood so that it may be pulled along by the force meter. Then the block must be massed and its mass recorded (see table of results)

Further experiments could be undertaken such as studying friction of an object on a slope. A wooden block will be placed onto a board. The block is massed beforehand. One end of the board will be raised slowly. As the slope increases, the block will not move until a certain angle is reached. When this angle is reached, the block will slide down the slope. This angle will then be recorded using a protractor. A mass will then be added to the block (the mass should be taped down to the block to prevent it from sliding off). The slope of the board will then be once more increased until the point where the block will slide off. Once again, the weight of the block + mass should be recorded in the table with the angle of the slope. This procedure will then be repeated using 6 more masses. A graph may then be plotted to demonstrate any relationship between the weight of the object and the slope at which it began to move. The graph plotted could be the angle of the slope at which the block moved over the weight of the block.  Any extra tests will only increase the reliability of the Hypothesis.