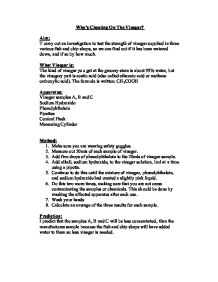 Who's Cheating On The Vinegar?

Who's Cheating On The Vinegar? Aim: T carry out an investigation to test the strength of vinegar supplied in three various fish and chip shops, so we can find out if it has been watered down, and if so by how much. What Vinegar is: The kind of vinegar you get at the grocery store is about 95% water, but the vinegary part is acetic acid (also called ethanoic acid or methane carboxylic acid). The formula is written: CH3COOH Apparatus: Vinegar samples A, B and C Sodium Hydroxide Phenolphthalein Pipettes Conical Flask Measuring Cylinder Method: 1. Make sure you are wearing safety goggles. 2. Measure out 20mis of each sample of vinegar. 3. Add five drops of phenolphthalein to the 20mls of vinegar sample. 4. Add alkali, sodium hydroxide, to the vinegar solution, 1ml at a time using a pipette. 5. Continue to do this until the mixture of vinegar, phenolphthalein, and sodium hydroxide had created a slightly pink liquid. 6. Do this two more times, making sure that you are not cross contaminating the samples or chemicals. This should be done by washing the affected apparatus after each use. 7. Wash your hands 8. ...read more.

This may not happen quickly if one is a stronger chemical than the other, you will need more of the weaker chemical to make a neutral solution. The chemical word equation for a neutralisation reaction is- Acid + Base = Salt + Water Neutralisation happens because acids contain hydrogen atoms with a positive (+) electrical charge, these are called ions. The chemical symbol for this atom is H+ While alkali solutions contain hydroxide ions, which have a negative (-) electrical charge. The chemical symbol for this atom is OH� When an acidic solution and an alkali solution are mixed, each hydrogen ion joins up with a hydroxide ion to form a water molecule. This is therefore why in the word equation the acid and base form water, and the fact that water is formed is why the final solution is neutral. Therefore the chemical formula for the vinegar and sodium hydroxide would look like this- CH3COOH(aq) + NaOH(aq) --> CH3COONa(aq) + H2O(l) This show how the hydrogen and oxygen atoms have joined together, leaving a salt and water, like in my explanation. The results where not as I had expected, this is only because I thought that all of the chip shops that we where going to test would water down their vinegar, in reality only two of the three did do so. ...read more.

A problem I found with the instruments was that it is very hard to be precise when measuring liquids in a pipette or measuring cylinder. This is because the water doesn't sit level in such a thin tube. Instead it creates a convex shape, which makes measuring 1ml of sodium hydroxide quite difficult indeed. This may not affect the results when measuring out 1 or 2mls, but when you're measuring out 20 or thirty the extra 1/4 of a ml soon adds up. Although, the test was still fair as all four samples had this bias'- therefore all the results where proportionate. A problem we found when using phenolphthalein, as an indicator, is that the colour suddenly changed from clear to red, but we wanted the colour pink, as this shows a neutral solution. Pink is in between clear and red, and the colour abruptly changes, often causing the solution to become alkali. We could have solved this problem by starting with the alkali, sodium hydroxide, and adding vinegar to that. This would have meant that it will be a slightly slower change from red to pink, as opposed to a quick change from clear to pink. But even though I have found these problems I still feel my data is both accurate and validated. ...read more.