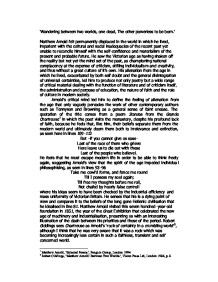 'Wandering between two worlds, one dead, The other powerless to be born.' Matthew Arnold felt permanently displaced in the world in which he lived, impatient with the cultural and social inadequacies of the recent past yet unable to reconcile himself with the self-confidence and materialism of the present and probable future. He saw the Victorian age as having shaken off the reality but not yet the mind set of the past, as championing national complacency at the expense of criticism, stifling individualism and creativity, and thus without a great culture of it's own. His alienation from the age in which he lived, exacerbated by both self doubt and the general disintegration of universal certainties, led him to produce not only poetry but a wide range of critical material dealing with the function of literature and of criticism itself, the administration and purpose of education, the nature of faith and the role of culture in modern society. Arnold's critical mind led him to define the feeling of alienation from the age that only vaguely pervades the work of other contemporary authors such as Tennyson and Browning as a general sense of faint unease. The quotation of the title comes from a poem Stanzas from the Grande Chartreuse1 in which the poet visits the monastery, despite his profound lack of faith, because he feels that, like him, their ...read more.

This raised questions about what, if anything, we can be certain of, yet at the time the shock was such that any answers seemed unconvincing replacements for unquestioning faith. Science had undermined Christianity but Britain was not yet able to fully accept and fill the chasm it had left in society and ideas. Arnold was not able to compensate by elevating nature to a position of control and interaction with mankind, for he saw a sharp division between humanity and the natural world, as in lines 12 and 13 of In Harmony with Nature Man must begin, know this, where Nature ends; Nature and man can never be fast friends.. Nature functions without any human intervention and to try to connect us to it is to confuse two separate planes of existence. Arnold not only saw humanity as between two worlds in terms of belief, but also in the sphere of culture. In his 1864 essay The Function of Criticism at the Present Time he outlined the idea that England will not see a golden age of creativity and culture unless it sheds the self satisfied complacency of its arts and even its science, history and philosophy and makes an effort 'to see the object as in itself it really is'. ...read more.

become far less immediate to the author or reader, and there are no more works as personal and subjective as the Marguerite series. In looking back to Hellenic civilisation for a model of social and cultural order he was caught between the glories of the dead past and his yet unrealised hopes for the future, for he saw the ideal modern spirit as that critical mind set which refused to accept things on authority, and recognised the ancient Greeks as much closer to that ideal than the English had ever been. He felt that Victorian society had rejected true values from the past such as critical objectivity, but he hoped that the future might be rescued from ruin by a reorganisation of education and culture along critical lines so that the country might move from this strange state of fragmentation and uncertainty into a new age of social and cultural coherence. 1 Matthew Arnold, 'Selected Poems', Penguin Group, London 1994 2 Robert Giddings, 'Matthew Arnold: Between Two Worlds', Vision Press Ltd, London 1986, p. 8 3 Matthew Arnold, Culture and Anarchy (1869), Cambridge University Press 1955, p.76 4 ibid. p82 5 Matthew Arnold, General Report for 1871 in Reports on Elementary Schools 1852-1889, MacMillan 1889, p.157 6 Matthew Arnold, 'The Popular Education of France' in 'Democratic Education, Michigan University Press 1962, p. 22 ?? ?? ?? ?? ...read more.