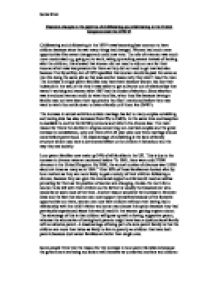 Examine changes in the patterns of childbearing and childrearing in the United Kingdom since the 1970's? Childbearing and childrearing in the 1970's was becoming less common to have children because since the war many things had changed. Women had much more opportunities like career changes and could now vote. The role of a women was much more modernised e.g. going out to work, taking up exciting careers instead of looking after the children, this showed that women did not need to rely on men for their income which was less pressure for them as they did not need to get married also because The Equal Pay Act of 1970 specified that women should be paid the same as men for doing the same job so that was another reason why they didn't need the men. The increase in single parent families may have been because women had lost their husbands in the war, at the time it was easier to get a divorce out of relationships that weren't working and women after 1967 had the choice of abortion. ...read more.

Another reason would be the increase in feminist ideas and the fact that women can now support themselves because of the fantastic opportunities out there, women can now have children without ever having had a relationship with the child's father and some may choose this option because they had previously experienced abuse this would result in the women getting a sperm donor. The advantage of this is that children will grow up with a loving, supportive parent, whereas the alternative of having both parents might have been a dysfunctional family with an abusive parent. A disadvantage of being part of a lone parent family is that the children are more than twice as likely to live in poverty as children that have both parents because duel career families are better than single ones. Some people think that the reason for the increase in lone parent families is because the government are being too lenient with benefits as unmarried mothers and children tend to receive more. Charles Murray (1984) ...read more.

On an overall level, the extended family still plays an important role in the lives of many people today even though the members no longer live in the same household, and are no longer bound by mutual obligations as strong as in the past. There have been many changes in relationship patterns such as fewer first marriages, more divorces, re-marriages and co-habitations. There have also been differences in parenting such as more births outside marriage, stepfamilies and lone parents. Even the original extended family has changed. The main reasons for these changes include the greater level of individualism, reduced stigma and changing attitudes and the changing position of women. Considering that all of these changes have created a post modern society, where everyone can do what they please. In conclusion, I think that childbearing and childrearing has become less needed as there's more freedom for people to do what they please. There are different factors such as divorce rates which lead to different type of families, such as step families and lone parent families. Sonia Khan ...read more.