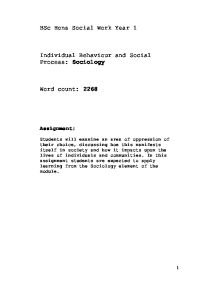 Gender oppression and how this manifests in education and society.

BSc Hons Social Work Year 1 Individual Behaviour and Social Process: Sociology Word count: 2268 Assignment: Students will examine an area of oppression of their choice, discussing hoe this manifests itself in society and how it impacts upon the lives of individuals and communities. In this assignment students are expected to apply learning from the Sociology element of the module. For the purpose of this essay the writer will look at gender oppression and how this manifests in education and society. The writer will also look at what impact gender has on the lives of individuals and communities. The place in which we are born may contribute to the way we live, think and act. Different cultures and religions have different attitudes, values and beliefs. Society is made up of a diverse range of people. Therefore, there are many different social divisions in which oppression can occur such as class, race, gender, age, disability and sexual identity. (Thompson, 2001:11). "Gender is the social aspect of the differentiation of the sexes. Sociological discussions in this area recognise that social rather than biological processes are the key to understanding the position of women (and of men) in society (Thompson, 2005:40)." Oppression is a negative outcome, which people experience through the cruel exercise of power in society or in a social group. ...read more.

Radical feminists refuse to accept the help from men in their struggle to fight for women's rights because men are often seen as enemies of women's liberation from a radical feminist point of view. They believe that even if they are well-meaning, men will only create trouble with their masculine perspective and behaviour (Frye,M, 1997:413). Liberal feminism is the dominant ideology of modern society and is grounded in classic liberal thinking that individuals should be free to develop their own talents and pursue their own interests and should be treated according to their individual merits rather than on others basis's such as in the feminist's case and sexual characteristics. But because liberalism evolved in a context in which the private sphere of the family was excluded from political demands for equality, in which traditional social arguments remained strong, and in which the Church upheld women's subordinate role in the family, liberal feminism developed. Marxist and Social Feminists do not blame women's exploitation entirely on men. They see capitalism rather than patriarchy as being the basic source of women's oppression, and capitalists as the main beneficiaries. Marxist-feminist's focus on the historical and political roots of sexism unlike the radical approach which focus on the biological root (Thompson 2001: 56). Marxist and social feminists also see that women are exploited in unpaid work as housewives and mothers. ...read more.

experience, the role models they are offered, the expectations teachers have of boys and girls and the ways teachers reward and discipline them can all affect the size and nature of the gender gap" (Arnot, et al l998). Girls may be outperforming boys in education but it is evident that in the workplace men will still occupy the highest positions as Tim Hames from The Times wrote: "Anyone out there who thinks that, because boys have achieved only 46% of all the A grades at A-level in August 2000, men will command only 46% of the most senior and lucrative posts available when this same group of teenagers hit their mid-30s, is either utterly crackers or has privately devised a means of rendering pregnancy, as it has been understood for the past four million years, entirely redundant." He said later, "The underlying dilemma in the British education system is now, as it has been for a hundred years, if not more, still social class not gender." (TES, 18 August 2000). Women achievements and contributions are rarely given due credit in a male dominated society. Social workers need to value women, their thoughts, feelings and work. At a micro level, social work can contribute to enhanced self esteem for women clients and staff and at a macro level play at least a small part in the breaking down of the sexist devaluation of women. ...read more.