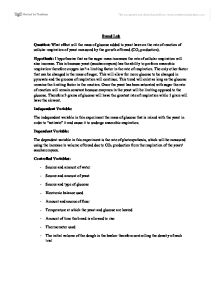 Bread lab. What effect will the mass of glucose added to yeast have on the rate of reaction of cellular respiration of yeast measured by the growth of bread (CO2 production).

Bread Lab Question: What effect will the mass of glucose added to yeast have on the rate of reaction of cellular respiration of yeast measured by the growth of bread (CO2 production). Hypothesis: I hypothesize that as the sugar mass increases the rate of cellular respiration will also increase. This is because yeast (saccharomyces) has the ability to perform anaerobic respiration therefore oxygen isn't a limiting factor in the rate of respiration. The only other factor that can be changed is the mass of sugar. This will allow for more glucose to be changed in pyruvate and the process of respiration will continue. This trend will exist as long as the glucose remains the limiting factor in the reaction. Once the yeast has been saturated with sugar the rate of reaction will remain constant because enzymes in the yeast will be limiting opposed to the glucose. Therefore 3 grams of glucose will have the greatest rate of respiration while 1 gram will have the slowest. Independent Variable: The independent variable in this experiment the mass of glucose that is mixed with the yeast in order to "activate" it and cause it to undergo anaerobic respiration. Dependent Variable: The dependent variable in this experiment is the rate of photosynthesis, which will be measured using the increase in volume of bread due to CO2 production from the respiration of the yeast/ saccharomyces. Controlled Variables: - Source and amount of water - Source and amount of yeast - Source and type of glucose - Electronic balance used - Amount and source of flour - Temperature at which the yeast and glucose are heated - Amount of time the bread is allowed to rise - Thermometer used - The initial volume of the dough in the beaker therefore controlling the density of each trial Procedure: 1) Measure and weigh, using weigh boat and electronic balance, 1 gram of glucose. ...read more.

Mass of Glucose g (�0.05 g) Average Change in Volume mL (�1.0 mL) Time minutes (�0.005 minutes) Rate of Bread Expansion mL/minute 1.0 102.0 30.00 3.400 �0.98% 1.5 134.0 30.00 4.467 �0.74% 2.0 150.3 30.00 5.010 �0.66% 2.5 166.0 30.00 5.533 �0.60% 3.0 300.0 30.00 10 .00�0.33% Graph 1: Shows the correlation between the rate of bread expansion and the mass of glucose that was mixed with the yeast. Conclusion/ Evaluation Based on this experiment the hypothesis was supported. In this experiment the rate of respiration was measured through the change in volume of bread. This is an accurate method for representing the rate of respiration because the increase in bread volume is a result of the increase in carbon dioxcide. Along with ethanol, CO2 is a final product of anaerobic respiration from sacchromyces therefore as respiration increase the concentration of CO2 will increase which in turn will increase the volume of the bread. Based on this the greatest volume and the greatest rate of bread expansion will equate to the fastest and greatest rate of respiration. The greatest mass of glucose resulted in the greatest rate of anearobic respiration because, as aforementioned, glucose is a reactent in the reaction to produce CO2: Glucose (C6H12O6)-->Pyruvate-->CO2+ C2H5OH+ATP. As can be seen in the reaction if there is a defficiency in glucose the reaction will not react at its full capacity. It will reach its maximum rate when the yeast/ sacchromyces becomes saturated with glucose resulting in the limiting factor being in the cells and not a variable being changed. The mass of glucose which woul yield the greatest rate of reaction can be calculated using the line of best fit which was chosen. In Graph 1, a logarithmic line of best fit was chosen because of the expected behaviour of the reaction. Once the yeast becomes saturated the rate of respiration levels out and stops increases; this creates a plateu in the graph. ...read more.

Another possible solution to this would have been to designate a certain amount of time that the yeast would be left for before mixing with the flour and water. The amount of time would have to long enough to ensure that the experiment could be set up within the time limit. A third possible error could have been that some CO2 gas escaped from the beaker while the experiment was being conducted. This would have caused the volume of the bread to be less even though more CO2 could have been produced. A possible solution to this could be to put a solid lid on top of the beaker in order to prevent the CO2 from escaping. This solution might also cause some errors because if the pressure is too high in the beaker the lid might come off and the problem would still exist however, this would not solve the underlying problem that the dough would not trap the CO2 and expand. This isn't too significant of an error because it was consistent throughout all of the trials and the trials are being compared to each other opposed to a known value. The other affects the accuracy not the precision, which is the important thing in this experiment. A fourth error that could have occurred is that when the bread rises it will not create a perfectly flat surface in order to measure the change in volume. In order to reduce this error the highest point of the dough was taken as the volume change. Similarly, the measurement of the initial volume had the same error and the same solution was used to reduce the error. Another possible error which wasn't controlled was the temperature and any of the conditions in which the experiment was conducted. It is unlikely that this would have contributed to any errors because all of the trials were conducted on the same day and in the same area of the classroom meaning that the temperature and light intensity were all relatively the same amongst the trials. ?? ?? ?? ?? ...read more.