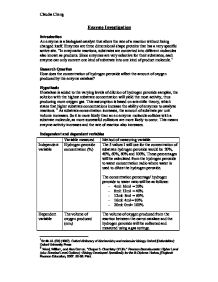 Enzyme Investigation. How does the concentration of hydrogen peroxide affect the amount of oxygen produced by the enzyme catalase?

Enzyme Investigation Introduction An enzyme is a biological catalyst that alters the rate of a reaction without being changed itself. Enzymes are three dimensional shape proteins that has a very specific active site. "In enzymatic reactions, substrates are converted into different molecules also known as products. Since enzymes are very selective for their substrates, each enzyme can only convert one kind of substrate into one kind of product molecule.1 Research Question How does the concentration of hydrogen peroxide affect the amount of oxygen produced by the enzyme catalase? Hypothesis If catalase is added to the varying levels of dilution of hydrogen peroxide samples, the solution with the highest substrate concentration will yield the most activity, thus producing more oxygen gas. This assumption is based on scientific theory, which states that higher substrate concentrations increase the ability of enzymes to catalyze reactions. 2 As substrate concentration increases, the amount of substrate per unit volume increases. So it is more likely than an en enzyme molecule collides with a substrate molecule, as more successful collisions are more likely to occur. ...read more.

Size/SA of potato Each potato piece would be obtained using a core borer to ensure the diameter of each piece is constant. Each piece will also be 2cm long by using a ruler to measure each one. Time For each experiment, the potato pieces would be left in the hydrogen peroxide to react for 5 minutes after which the volume of oxygen produced would be recorded. A timer would be used to time accurately. Volume of solution (cm3) 20 cm3 of solution will be used for each experiment. The concentration however, may vary with the amount of hydrogen peroxide and water as long as the volume totals 20 cm3. Measuring cylinders will be used for accurate measurement. Type of substrate & enzyme The type of substrate and enzyme has to be the same for the whole experiment to work. The substrate is the hydrogen peroxide and the enzyme is catalase, which is obtained from potatoes. Equipment Equipment such as measuring cylinders, conical flasks and gas syringes will need to be the same. ...read more.