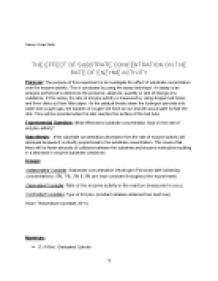 Experimental Question: What effect does substrate concentration have on the rate of enzyme activity?

Therefore, the more substrate molecules are available, the more frequently there is access of active sites of enzyme molecules. Evaluation: There were many sources of errors in this experiment. In the test tube, we found that in one area if there is less substrates, there is less probability to enter in the active site, whereas more substrates will increase the probability to enter in the active site. The faster the reaction, the more hydrogen peroxide decomposed. Therefore, the rate of reaction increases as substrate concentration increases. But there must be a limit to how much substrate is available. At the limit point, when the product is immediately produced, the next substrate should put into the active site and this should go on until the substrate is gone. The only thing that may stop the enzyme activity of saturated substrates would be allosteric inhibition and feedback inhibition. This means that the enzyme will always work until all the substrate is decomposed even though saturated. Having more trials with more concentration of Hydrogen Peroxide would have improved the results. It would help The volumes of the liver extract are slightly different from each other and this may affect the experiment?s results. The volume of the hydrogen peroxide might be changed because it is very reactive and some of the substrate has already broken into water and oxygen. This will somehow influence the experiment results. ...read more.