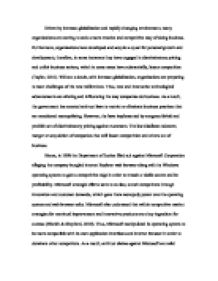 Antitrust Law and the case of Microsoft.

Driven by increase globalization and rapidly changing environment, many organizations are starting to seek a more creative and competitive way of doing business. Furthermore, organizations have developed and acquire a quest for personal growth and development; therefore, in some instances they have engaged in discriminatory pricing and unfair business actions, which in some cases have substantially, lessen competition (Taylor, 2011). Without a doubt, with increase globalization, organizations are preparing to meet challenges of the new millennium. Thus, new and innovative technological advancements are altering and influencing the way companies do business. As a result, the government has enacted antitrust laws to restrict or eliminate business practices that are considered monopolizing. ...read more.

Thus, Microsoft manipulated its operating system to be more compatible with its own application interfaces and internet browser in order to dominate other competitors. As a result, antitrust claims against Microsoft are valid because fraudulent means were used to bungle its operating system and internet explorer web browser in order to gain advantages over competitors. Microsoft Corporation monopolized a vast majority of personal computers with their software. In addition, Microsoft threatened PC developers that they would revoke Windows distribution licensing agreement if manufacturer removed Internet Explorer icon off desktop applications. If the PC manufacturers had removed the Explorer icon during installation, this would have taken away Microsoft manipulative monopoly and competitive edge, and the company would probably not remain a viable source for profitability. ...read more.

After the guilty verdict, the company was broken up into two entities whereby one half was responsible for operating system and the other half software components. Bungling between Microsoft operating system and its internet browser was no longer allowed. Furthermore, as part of their settlement agreement, they must share their programming interfaces for internet browsing to other third party companies requiring the use of such application. In addition, the settlement also called for implementing an independent watch group to ensure Microsoft remains in compliance with applicable law and non violating of antitrust acts. On one or a company is above the law. However, Microsoft received a slap on the wrist for their wrong doings. Hisrich, P. M., & Shepherd, D. (2010). Entrepreneurship (8th ed.) New York, McGraw-Hill Taylor, E. (2011). Innovation and technology: Retrieved Nov 4, 2011, www.jamaicastar.com ...read more.