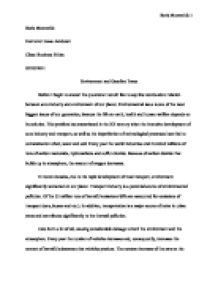 Environment and Gasoline Taxes. My thought about increase of gas taxes so the use of cars would be limited is the following; I agree with this idea, because in my opinion persons life is more important than the comfort of the motor vehicle and I

Boris Muravchik Instructor: Jesse Ashdown Class: Business Ethics 05/13/2011 Environment and Gasoline Taxes Before I begin to answer the questions I would like to say few words about relation between auto industry and environment of our planet. Environmental issue is one of the most biggest issues of our generation, because the life on earth, health and human welfare depends on its solution. This problem has exacerbated in the XX century when the intensive development of auto industry and transport, as well as the imperfection of technological processes have led to contamination of air, water and soil. Every year the world industries emit hundred millions of tons of carbon monoxide, hydrocarbons and sulfur dioxide. Because of carbon dioxide that builds up in atmosphere, the amount of oxygen decreases. In recent decades, due to the rapid development of road transport, environment significantly worsened on our planet. Transport industry is a potential source of environmental pollution. ...read more.

The way I see it, by increasing the gas taxes, people would start use less of their cars and this will cause the decrease pollution, the less pollution goes in the air the cleaner becomes our environment which supports the life on our planet. In this case many people will benefit from the gas taxes, since they will live longer and healthier lives. I personally don't see any injustice in it, because humans will benefit from decision completely. The way I understand it, our government job is to make our planet the safe place to live for human kind, so in some situations they must make sacrifices. So if in some case they will have to ride a bike to their job, I don't see anything wrong in it. Regarding some other solution which will help us to avoid the increase in gas taxes, I think that electric cars or hybrids is the solution. ...read more.

As I mentioned in the Pinto's Case, auto industry is all about the money, so if it is calculated that it's more profitable to pollute the world, they will do it without any hesitation. By controlling part of the auto industry governments can control the health of our country and the world. I again support my opinion with the Act Utilitarianism theory. In my opinion the ethical consideration of restricting the development of world's access to the same cheaper technologies (fluorocarbons, coal burning plants, etc.) that made the US what it is today, is the understanding the damage that these technologies bring to our planet. When these technologies were created, science wasn't thinking about the damage that it will bring to our planet; instead it concentrated on benefits that will be brought to the human kind. When many of these technologies were created, no one knew the consequences of these inventions, like global worming or the damages that it will bring to our ozone layer. ...read more.