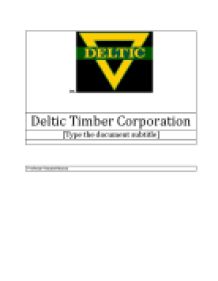 My paper on the Deltic Timber Corporation provides an overview of the company, and through using Porter`s 5 forces model, presenting the strategic analysis of both the company and its industry.

﻿dEL Deltic Timber Corporation [Type the document subtitle] Professor VlasovaVlasova ________________ My paper on the Deltic Timber Corporation provides an overview of the company, and through using Porter`s 5 forces model, presenting the strategic analysis of both the company and its industry. The report also presents financial statements and ratios information through which we can understand its competitive performance in the industry. And I have analyzed earnings, historical stock price performance and I have valued the stock price based on DDM and FCF models. Based on my research and different analyses I have given final recommendations about the price ranges to buy, sell, or hold the stock. 1. DELTIC TIMBER CORP. OVERVIEW Deltic Timber Corporation (Deltic) is a natural resources company engaged primarily in the growing and harvesting of timber and the manufacture and marketing of lumber. Deltic owns approximately 445,800 acres of timberland, mainly in Arkansas and north Louisiana. The Company?s sawmill operations are located at Ola in central Arkansas (the Ola Mill) and at Waldo in south Arkansas (the Waldo Mill). In addition to its timber and lumber operations, the Company is engaged in real estate development in central Arkansas. The Company also holds a 50% interest in Del-Tin Fiber LLC (Del-Tin Fiber), a joint venture to manufacture and market medium density fiberboard (MDF). The Company is organized into four segments: Woodlands, Mills, Real Estate and Corporate. The Company?s principal products are timber, timberland, softwood lumber products (primarily finished lumber), residual wood products, hunting land leases, oil and gas lease rentals and royalties, and real estate. 1. DELTIC TIMBER CORP.`STRATEGIC ANALYSIS It becomes clear that the company` strategy is diversification because it engages primarily in manufacturing of lumber but it is organized in four segments. However, to reach to this strategy we can follow Porter`s 5 forces analysis. 1. The threat of new entrants. Deltic Timber Corp., operating in lumber industry, suffers very high competition. ...read more.

As a whole, the P/B ratio for DEL was significantly higher in its industry. Additionally, the price to sales ratio (PS ratio) is most useful for comparing companies within a sector or industry because "normal" values for this ratio vary from industry to industry. We can observe P/S ratio again in the Ychart website (2012): In general, low price to sales ratios, where for Deltic Timber Corp. is in June 2009 are more appealing because they suggest that a company is undervalued. But now it is not because its P/S ratio is 6.498 which almostly reach its maximum in March 2012 and it is also the highest with its competitors. 1. ANALYSIS OF ANALYSTS' EARNINGS PROJECTIONS AND PROJECTED PERFORMANCE. Future earnings estimates are arguably the most important input when attempting to value a firm. By placing estimates on the earnings of a firm for certain periods (quarterly, annually, etc), analysts can then use cashflow analysis to approximate a fair value for a company, which in turn will give a target share price for publicly traded companies. To obtain the best information for Deltic Timber Corp. earnings projections and performance we can observe some of the things from the last Q4 2012 earnings conference call presented in the Report Linker website (2012): Financial results for the first quarter of 2012 were net income of $100,000, $0.01 a share. These results were the same as recorded for the first quarter of 2011. Going through our operating segments in detail, the Woodlands segment reported operating income of $4.8 million, $100,000 increase from the first quarter of 2011? Oil and gas lease rental and royalty income for the first quarter of 2012 was $1.4 million, about $200,000 less than the same period a year ago due to the impact of decade-low prices for natural gas? Our Mills segment reported income of $1.6 million in the first quarter of 2012 compared to income of $700,000 in the first quarter of last year? Consequently, the corporation maintains successfully the net income in 2012 from 2011. ...read more.