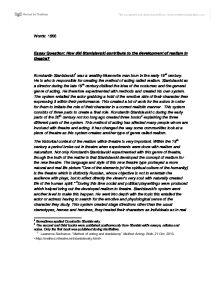 Words: 1566 Essay Question: How did Stanislavski contribute to the development of realism in theatre? Konstantin Stanislavski1 was a wealthy Muscovite man born in the early 19th century. He is who is responsible for creating the method of acting called realism. Stanislavski as a director during the late 19th century disliked the idea of the costumes and the general genre of acting. He therefore experimented with methods and created his own system. The system entailed the actor grabbing a hold of the emotive side of their character then expressing it within their performance. This created a lot of work for the actors in order for them to imitate the role of their character in a correct realistic manner. This system consists of three parts to create a final role. Konstantin Stanislavski c during the early parts of the 20th century not too long ago created three books2 explaining the three different parts of the system. This method of acting has affected many people whom are involved with theatre and acting. It has changed the way some communities look at a piece of theatre as this system creates another type of genre called realism. ...read more.

This is when Stanislavski's method comes in handy. The way my character walks, could trigger various emotions within myself as the actress performing it. The very simple action of placing two hands before my eyes could create and trigger an emotion of my past which could cause me to cry. These are very key things that could and should be combined into a realism monologue like such in order to create a worthy performance. The audience whom are watching this performance should feel engaged with the emotive side of the character which is combined with the physical movement. If this aspect of the performance is missing it will not run smoothly causing the audience to be bored and detached with the entire performance. Stanislavski developed various different techniques in order to accomplish his idea of realism theatre. There are many steps the actor or actresses have to follow before having a truthful realistic performance. Analyzing a character is the most crucial part of his system. The actor has to understand and know the character in and out. When analyzing the character the actor has to answer three questions, 'What do I (the character) ...read more.

In conclusion Stanislavski is one of the very people who contributed to develop the idea of realism in theatre. This directly involves Konstantin Stanislavski due to the fact that he was the very person whom created the system. This system is the very system actors of all ages use when dealing with realism theatre. Stanislavski went into depth when dealing with the idea. He created a system that not only involved acting but the theoretical aspect of it too. This makes the system in itself a very powerful one. The system created by Stanislavski has not only impacted the actor's way of acting but has also impacted the way the audience looked at theatre. 1 Sometimes spelled Constantin Stanislavsky. 2 The second and third books were published posthumously from Stanislavski's essays, articles and notes. Only the first book was published during his lifetime. 3 Lawrence Sacharow. "Method of acting and stanislavsy" Method Acting. Web. 21 Oct. 2010. <http://method.vtheatre.net/stanislavsky.html>. 4 "Stanislavski's System." Wikipedia, the Free Encyclopedia. Web. 21 Oct. 2010. <http://en.wikipedia.org/wiki/Stanislavski's_system#The_Method_of_Physical_Action>. 5 Stanislavski.pdf.22 Mar. 2006.PDF 6 Stanislavski maintained that his techniques transcended style. His company the MAT performed many different styles, from Moliere to Shakespeare. In America however, he is mainly associated with psychological realism. Stanislavski.pdf.22 Mar. 2006.PDF 7 "Stanislavski." Untitled Document. Web. 28 Oct. 2010. <http://www.kryingsky.com/Stan/Biography/bot.html>. ?? ?? ?? ?? ...read more.