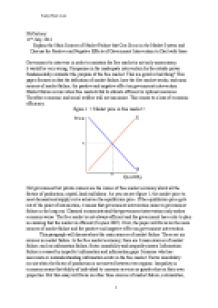 ﻿Sang Hyun Lee McCartney 11th July, 2012 Explain the Main Sources of Market Failure that Can Occur in the Market System and Discuss the Positive and Negative Effects of Government Intervention to Deal with these Government to intervene in order to maintain the free market is not only unnecessary, it would be very wrong. Companies in the inadequate intervention by the outside power fundamentally contradict the purpose of the free market. This is a good or bad thing? This paper focuses on that the definition of market failure, how the free market works, and main sources of market failure, the positive and negative effect on government intervention. Market failure occurs when free markets fail to allocate efficient or optimal resources. Therefore economic and social welfare will not maximize. This causes to a loss of economic efficiency. figure 1: < Market price in free market > Not government but private owners are the owner of free market economy about all the factors of production; capital, land and labour. As you can see figure 1, the market price to meet demand and supply curve achieves the equilibrium price. If the equilibrium price gets out of the point of intersection, it means that government intervention cause to government failure in the long run. ...read more.

As you can see below diagram, this provides a way of picture the effects of negative externalities caused by production. The important thing is to know that difference between private and social costs. Figure 2: <Market failure from negative externalities> (<as-marketfailure-negative-externalities_clip_image007.jpg> n.d.). Second, usually, free market economy will fail to deliver efficiently certain public goods and services. To provide pure public items, tax, or duty charges are supplied through other forms. This is a subjective judgment on the derived benefits. Example of missing market, there are a lot of goods that have a public factor however they are not public goods. Like, congested motorway. Third, market failure under monopoly is main source of market failure. Imperfect competition can cause to market failure. Monopolists waste scarce resources. It means that high quality of marketing designed to raise brand loyalty and construct barriers of entry. The monopoly of private business is quite unusual case. As a matter of fact, many governments in the world have particular provisions to intervene monopolistic market. The example of similar situation about monopoly in real world is Microsoft which product is homogeneous. In their situation, one seller is dominating the market and there are high barriers to entry. ...read more.

And an efficient subsidy can correct market failure. But there is a negative effect on subsidy. In developing industry, they can make the market industry less competitive by giving a subsidy the poor part of market. Subsidies is not good for developing country in industry and in doing so maintain the poorer companies well, thereby disturbing long term growth. Lastly, government can pass the law which ban the sale of alcohol or smoking in common place. Such like these regulations may be useful for making fresh competition. For example, laws can break up the existing monopoly power in competition market. A real example of this is the competition for British Telecom. This is known as market liberalisation. But government regulations do not always work on intended way. They can impose a lot of costs on the poor. The more citizens are to escape laws, the less effective they are. Up to now, this essay discussed about two main points. The first thing was three main sources of market failure like externalities, missing market, and lack of competition and the second point was positive and negative effects of government intervention such as tax, subsidy, and regulation. To sum up, Government intervention in the free market is basically aimed in declining inequalities and injustices of market failure even though there are some risks of occurring other economic problems. ...read more.