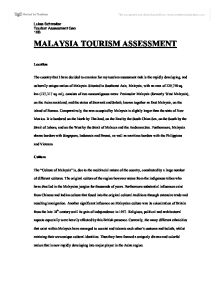 MALAYSIA TOURISM ASSESSMENT Location The country that I have decided to examine for my tourism assessment task is the rapidly developing, and culturally unique nation of Malaysia. Situated in Southeast Asia, Malaysia, with an area of 329,750 sq. km (127,317 sq. mi), consists of two noncontiguous areas: Peninsular Malaysia (formerly West Malaysia), on the Asian mainland, and the states of Sarawak and Sabah, known together as East Malaysia, on the island of Borneo. Comparatively, the area occupied by Malaysia is slightly larger than the state of New Mexico. It is bordered on the North by Thailand, on the East by the South China Sea, on the South by the Strait of Johore, and on the West by the Strait of Malacca and the Andaman Sea. Furthermore, Malaysia shares borders with Singapore, Indonesia and Brunei, as well as maritime borders with the Philippines and Vietnam. Culture The "Culture of Malaysia" is, due to the multiracial nature of the country, constituted by a large number of different cultures. The original culture of the region however stems from the indigenous tribes who have dwelled in the Malaysian jungles for thousands of years. Furthermore substantial influences exist from Chinese and Indian culture that fused into the original cultural traditions through extensive trade and resulting immigration. Another significant influence on Malaysian culture was its colonization of Britain from the late 18th century until its gain of independence in 1957. Religious, political and architectural aspects especially were heavily affected by this British presence. Currently, the many different ethnicities that exist within Malaysia have managed to coexist and tolerate each other's customs and beliefs, whilst retaining their own unique cultural identities. Thus they have formed a uniquely diverse and colorful nation that is now rapidly developing into major player in the Asian region. History As mentioned before the Malaysian people were subject to foreign colonization during the late 18th and 19th centuries. ...read more.

Tourism in Malaysia is largely seen as a benefit as oppose to a disadvantage. It is bringing job opportunities for the local people through the opening of hotels and other leisure operation businesses, and is spurring the already booming economy by bringing foreign investment into the country. Although some say that the increasing tourist arrivals to the country are extinguishing the established traditions of the indigenous Orang Asli, overall the Malaysian government is doing very well in using these ancient traditions as an attraction whilst keeping them intact and unchanged. Modes of Transportation The transportation systems throughout Malaysia are highly developed and incorporate various modes of travel such as air, rail, and road. Thus getting around the country poses little difficulty due to the convenience, efficiency and affordability of each type of transport. The modes of transportation that I would utilize for my tour are primarily air, road, and water as the places that I plan to visit are most conveniently accessible through these kinds of transport. Air-The national airline, Malaysia Airlines, provides an excellent domestic link to all the major towns and cities in the country. Kuala Lumpur is the center of this network, from which you can fly to Penang, Langkawi, Alor Setar, Ipoh, Kota Baru, Kuala Terengganu, Kuantan, and Johor Bahru. These are the major towns on the Peninsula and in addition the airline also targets the two eastern capitals of Kuching (Sarawak) and Kota Kinabalu (Sabah), and so overall it provides an extensive and highly convenient travel alternative for tourists. Road-Malaysia's road network covers 98,721 kilometers (61,342 mi), of which 80,280 kilometers (49,884 mi) are paved, and 1,821 kilometers (1,132 mi) consist of express ways, of which the longest is the North-South Express way, extending over 800 kilometers (497 mi) between the Thai and Singapore border. Although the road systems of Sabah and Sarawak are less developed and of lower quality in comparison to those of Peninsular Malaysia, overall road travel in Malaysia is convenient and efficient. ...read more.

The eco-sensitive tour incorporates both, as it firstly gives the local people the opportunity to restore some of their cultural and historical assets, due to the fact that these are of touristic value. This in turn strengthens their cultural identity, and emphasizes the traditions of their society. However the negative effect of this comes with the fact that this strengthening of identity is aided by foreign intervention. The contact between foreign visitors and local, even indigenous people, is inevitable in a country where tourism is ever increasing. Visits to the untouched forests of Sabah to experience the Orangasli traditions in my planned tour are an example of this issue of social difference. Extent of Promotion of " Sustainable Tourism " "Sustainable tourism is an industry committed to making a low impact on the environment and local culture, while helping to generate future employment for local people." My eco-sensitive vacation most certainly advocates and promotes sustainable tourism as the overall effects and impact of it fulfills the given definition of sustainable tourism. Firstly my eco-sensitive vacation supports the definition as it is committed to having a minimal, low impact on the environment. This is achieved by planning the tour through an operation business that is committed to doing this, as well as choosing accommodation that prioritizes the conservation and preservation of the environmental assets of the country. Furthermore my tour is also committed to preserving the Malaysian culture by visiting sites that are protected from foreign corruption and interference, and this is another crucial aspect of sustainable tourism. Finally my tour is also beneficial to the local people and economy, as it generates employment opportunities for locals that provide reasonable income and thus allows the country's economy to be boosted. Hotels such as Sukau River Lodge, in my tour, are prime examples of this, as they are truly committed to providing the locals with jobs and income through prioritizing the employment of locals, and working in cooperation with local businesses. ?? ?? ?? ?? Lukas Schmelter Tourism Assessment Geo 10B ...read more.