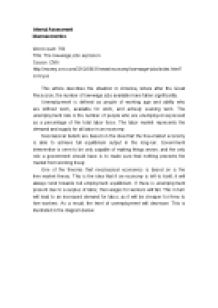 ﻿Internal Assessment Macroeconomics Word count: 750 Title: The low-wage jobs explosion Source: CNN http://money.cnn.com/2012/08/31/news/economy/low-wage-jobs/index.html?cnn=yes This article describes the situation in America, where after the Great Recession, the number of low-wage jobs available have fallen significantly. Unemployment is defined as people of working age and ability who are without work, available for work, and actively seeking work. The unemployment rate is the number of people who are unemployed expressed as a percentage of the total labor force. The labor market represents the demand and supply for all labor in an economy. Neoclassical beliefs are based on the idea that the free-market economy is able to achieve full equilibrium output in the long-run. Government intervention is seen to be only capable of making things worse, and the only role a government should have is to make sure that nothing prevents the market from working freely. ...read more.

If wages are dropped to W2, there will be a new demand curve D1. This will result in a new equilibrium at W2 and L1. Any unemployment left in the economy will be purely voluntary ? people who have chosen not to work at the current real wage rate. The article states that after the Great Recession, approximately 60% of the jobs lost were mid-wage positions and 19% were higher-wage positions. More than half of the people who lost their jobs during the recovery period and have since found new ones are now working for lower wages, and about one-third of these workers have taken a pay cut of 20% or more. This supports the neoclassical theory that trade union and government intervention is unnecessary. According to neoclassicists, if people lose their jobs and become unemployed, they will settle for new jobs with lower wages than before. ...read more.

Also, unemployed people with lower incomes will pay less tax as a result, which means less government revenue available. The government might therefore have to spend more money to solve the various social problems created by unemployment. An argument against the neoclassical belief that falling real wage rates are beneficial to the economy in terms of reducing unemployment is the negative effect they have on low-income workers. These are the people who are most affected by falling wage rates, as it further reduces what low incomes they already had. This in turn is likely to decrease their living standards. High-income workers are not affected as severely, as the decrease in wage rates has less of an impact on their incomes. In conclusion, this article supports the neoclassical belief that falling real wage rates is a solution to solving unemployment, and that the government should not interfere with the working of the market. ...read more.