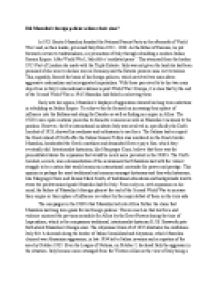 ﻿Did Mussolini?s foreign policies achieve their aims? In 1921 Benito Mussolini founded the National Fascist Party in the aftermath of World War I and, as their leader, governed Italy from 1922 - 1943. As the father of Fascism, he put forward a return to traditionalism, a rejuvenation of Italy through rebuilding a modern Italian Roman Empire. After World War I, Italy felt a ?mutilated peace?. This stemmed from the broken 1915 Pact of London she made with the Triple Entente. Italy was not given the land she had been promised if she were to declare war on Germany and the Entente powers came out victorious. This, arguably, formed the basis of his foreign policies, which involved two main ideas: aggressive nationalism and reinvigorated imperialism. With these perceived to be his two main objectives in Italy?s international relations in post-World War I Europe, it is clear that by the end of the Second World War in 1945 Mussolini had failed in achieving them. Early into his regime, Mussolini?s displays of aggression showed his long term ambitions in rebuilding an Italian Empire. To achieve this he focused on increasing their sphere of influence into the Balkans and along the Danube as well as finding an empire in Africa. ...read more.

Italy became more estranged from the Western Allies as the view of Italy being a ?warmonger? increased. The initial help Britain and France were to offer through the Hoare-Laval Plan, giving Italy control over large portions of Abyssinia, was dropped when the general public expressed that they saw it as a form of betrayal to Abyssinia. This led to Mussolini turning to the German dictator Adolf Hitler for support. By 1940, Italy was in control of most Abyssinia. Perhaps seen as a success at the time, the Italian Empire that Mussolini had wanted to create was now spreading into Africa which was what he had wanted. However, in the long term the ?Empire? failed in rejuvenating imperialism. What more, the areas they had expanded into were poverty stricken and as such the Empire was a delusion of grandeur with territorial gain but increasing in little else in terms of economic achievement or some sort of military advantage from the area. It was because of the Abyssinia incident that Italy was forced to fight parallel wars during the Second World War, in Europe and in Africa, spreading herself too thin to truly be successful in any of her pursuits. ...read more.

Either to distract from the domestic problems by creating a sense of nationalism or fueled by revenge for their ?mutilated victory,? though he had no clear cut strategy on how he would achieve it, Mussolini had an overall goal for expansionism. For it was the actions he had made in pursuit of that expansionism, either spreading ideology through the Spanish Civil War or territorial gain in the Abyssinia Crisis, that led him to be allied with Germany rather than a succession of events that seemingly forced upon Italy her situation. Mussolini himself would say that ?imperialism is the eternal and immutable law of life,? expressing his view on the importance, and inevitability, of expansionism of territory and influence for a nation to be successful. Much of his actions, from aggressive confrontations along borders and support for rebellions, were most likely to have been to achieve this expansionism rather than single, slightly related events that Italy was forced into. As such, by the end of the Second World War in 1945 Italy had been defeated, her sphere of influence dwindling to the point of nonexistence and it left her a weak nation with a small presence in international affairs. Murdered at the end of the war, Mussolini left behind him an empty shell of a country, with goals of expansion unachieved and never fully realized. ...read more.