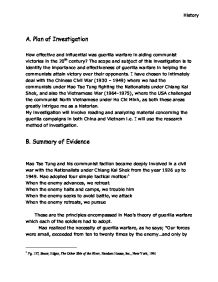 How effective and influential was guerilla warfare in aiding communist victories in the 20th century?

A. Plan of Investigation How effective and influential was guerilla warfare in aiding communist victories in the 20th century? The scope and subject of this investigation is to identify the importance and effectiveness of guerilla warfare in helping the communists attain victory over their opponents. I have chosen to intimately deal with the Chinese Civil War (1930 - 1949) where we had the communists under Mao Tse Tung fighting the Nationalists under Chiang Kai Shek, and also the Vietnamese War (1964-1975), where the USA challenged the communist North Vietnamese under Ho Chi Minh, as both these areas greatly intrigue me as a historian. My investigation will involve reading and analyzing material concerning the guerilla campaigns in both China and Vietnam i.e. I will use the research method of investigation. B. Summary of Evidence Mao Tse Tung and his communist faction became deeply involved in a civil war with the Nationalists under Chiang Kai Shek from the year 1926 up to 1949. Mao adopted four simple tactical mottos:1 When the enemy advances, we retreat. When the enemy halts and camps, we trouble him When the enemy seeks to avoid battle, we attack When the enemy retreats, we pursue These are the principles encompassed in Mao's theory of guerilla warfare which each of the soldiers had to adopt. ...read more.

He has also provided well weighted and balanced points accrediting the Vietcong guerilla campaign ably led by Ho Chi Minh and general tactics adopted by the communists in Vietnam, as well as having acknowledged certain American weaknesses in terms of technical, tactical and diplomatic aptitude. He exposes certain chinks in the American armor at the time of the Cold War and at the present moment. Snow, Edgar, The Other Side of The River, Red China Today, 1961, Random House, Inc., New York. With reference to the author and the content, this is quite a valuable source. Snow worked as a correspondent for many leading newspapers around the world, already giving you a semblance of valid and in depth research which is evident in this book. The content meticulously deals with many aspects concerning Mao and his life, showing depth of research, which is very valuable to a historian. Having gathered first hand information and having conducted interviews with Mao, he has been able to present first hand information and analysis, thus adding value as one could treat this as a primary source. However throughout the book, there is evidence of communist sympathies fro some reason, which can lead to bias in his attempt of being objective and thus the information presented may present limitations during the analysis stage. ...read more.