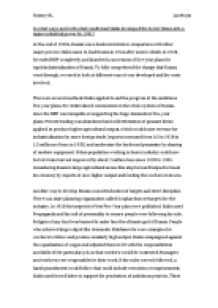 In what ways, and with what results had Stalin developed the Soviet Union into a major industrial power by 1941?

﻿History HL Jan Mojto In what ways, and with what results had Stalin developed the Soviet Union into a major industrial power by 1941? At the end of 1920s, Russia was a backward state in comparison with other major powers. Stalin came to lead Russia in 1924 after Lenin?s death. In 1928, he ended NEP completely and launched a succession of five-year plans for rapid industrialization of Russia. To fully comprehend the change that Russia went through, we need to look at different ways it was developed and the costs involved. There are several methods Stalin applied to aid the progress of the ambitious five-year plans. He reintroduced communism in the whole system of Russia, since the NEP was incapable of supporting the huge demands of five-year plans. Private trading was abandoned and collectivization of peasant farms applied, to produce higher agricultural output, which would raise revenue for industrialization by more foreign trade (exports increased from 0.3 in 1928 to 1.5 millions of tons in 1935) ...read more.

During the five-year plans, huge projects were completed that were to play a significant role in Russia?s future success. Some of the successful once include Dneiper dam, hydroelectric power station or Moscow metro. Agricultural machinery was improved for collective farms, making them more efficient in output production. A huge iron and steel plant was built at Magnitogorsk that had a significant impact on the heavy industry. Industry in Urals was developed to extract Asia?s rich mineral resources. New train network was developed, which aided the transport of raw materials. Between 1928 and 1941. 8,000 new enterprises were built. Since 1928 to 1940, Gross National Product rose from 100 to 203 in 1940. Coal, Steel, Oil and Electricity widely increased. Russia wouldn?t be able to withstand the violence of the Nazi blitzkrieg without this kind of rapid industrialization, especially the improvement in the production of military resources. Its state of 1920s wouldn?t be strong enough against the attack. We can see that Russia lost World War One, but as a result of the Industrialization, it won World War Two against Germany. ...read more.

There wasn?t anything for them to buy with the money they earned. Quantity was more important than quality and efficiency dropped, which made Russia much less competitive with the West, when the Iron Curtain was pulled off. Bureaucracy destroyed the individual?s initiative. Reasons needed to be more legitimate, as to why targets were not met than to think of ways overcoming them. Becoming an industrial power by 1941 therefore involved many ways in which the effort was hindered or even delayed. All in all, I was able to identify several ways and results in which Stalin transformed Russia into an industrial power by 1941. Most of the ways involved changing the whole system to communist ideology, in both agriculture and heavy industry sector. The achievements were great, even though many targets weren?t met and there was a lot of inefficiency. Most importantly, Russia was prepared for a war with Germany and a start to compete with world powers. However, all this involved a terrible human cost. Whether this was worth it or not is opened for discussion. ...read more.