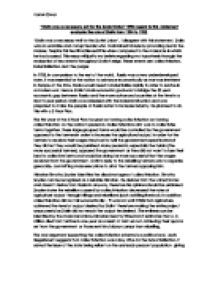 "Stalin was a necessary evil for the Soviet Union" With regard to this statement evaluate the rule of Stalin from 1924 to 1953 "Stalin was a necessary evil for the Soviet Union", I disagree with this statement. Stalin was an unstable and corrupt leader who maintained his rule by provoking fear in the masses. Despite this he still achieved little when compared to the massacre in which he had caused. This essay will justify my beliefs regarding my hypothesis through the evaluation of key events throughout Stalin's reign. These events are collectivisation, industrialisation and the purges In 1928, in comparison to the rest of the world, Russia was a very underdeveloped state, it was essential for the nation to advance economically as war was imminent in Europe at the time. Russia would need to industrialize rapidly in order to survive in a modern war. Hence Stalin's main economic goal was to bridge the 50 year economic gap between Russia and the more advanced countries at the time in a short 5 year period. Stalin was obsessed with the industrial situation and was prepared to make the people of Russia suffer to increase industry. He planned to do this with a 5 Year Plan. The first year of the 5 Year Plan focused on forcing collectivisation on forcing collectivisation on the nation's peasants. ...read more.

Stalin's collectivisation defiantly had more drastic effects though due to how it was strictly forced on so many people with such harsh regulations (death penalties, camps) resulting in millions of deaths. Of The Five Year Plan initiated by Stalin the key focus was on another sector, industrialisation. Industrialisation was the course of transforming an economy reliant on farming and agriculture into an industrial one which produced heavy industrial goods such as metals and oils. Historian Timothy Snyder argues that the workers who held down the industry were to be exterminated provoking a sense of fear within the workers, for again, like collectivisation, not fulfilling their quotas set by the government. This could be recognised as a social disadvantage as killing to provoke fear in the people is an unmoral, harsh and essentially evil act. Stalin tried to avoid this though by encouraging the people with propaganda campaigns in order to encourage workers to strive for their privileges and warp their minds to think what they are doing is correct. Both Stalin and Hitler were skilled users of propaganda they both used it as a tool to spread their ideas and to help them gain support from the people in their country. That is not to say there weren't differences in their propaganda though. The Soviet Union was a communist state and therefore tends to place Stalin amongst military, workers and children as if he were to be offering support for their needs. ...read more.

All the fear and killings in the country also reduced the economic development, this was due to the fact that many industrial workers were killed and the general worker moral decreased and with so their productivity. To conclude the purges contained no significant advantages for the Soviet Union. To restate the hypothesis Stalin was not a necessary evil for the Soviet Union. The extermination of the millions opposing his policies was an extremely unmoral and unjustifiable act. Through these awful actions he did not even manage to fulfil his goals set by The 5 Year Policy proving himself to be unsuccessful as a leader. Despite this is not entirely fair to say that Stalin was a complete failure. His industrialisation programme may have not achieved the output he set, yet it did still increase the good produced massively. The result of this was that it brought the Soviet Union to the modern world, however not as quickly as he wanted. Without this though the Soviet Union wouldn't have coped in World War 2 as well as it did and more would have died in the war if the country did not become more advanced. However this is still not justifiable considering that millions more where lost through Stalin's abysmal reign than what would have been lost in the war. Therefore proving Stalin was not a necessary evil for the Soviet Union. ?? ?? ?? ?? Karl Al-Omar ...read more.