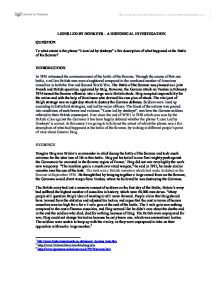 LIONS LED BY DONKEYS - A HISTORICAL INVESTIGATION QUESTION To what extent is the phrase "Lions led by donkeys" a fair description of what happened at the Battle of the Somme? INTRODUCTION In 1916 witnessed the commencement of the battle of the Somme. Through the course of that one battle, a million British men were slaughtered compared to the combined number of American casualties in both the first and Second World War. The Battle of the Somme was planned as a joint French and British operation, approved by Haig. However, the German attack on Verdun in February 1916 turned the Somme offensive into a large-scale British attack. Haig accepted responsibility for the action and with the help of Rawlinson who devised his own plan of attack. The vital part of Haig's strategy was an eight-day attack to destroy the German defenses. Soldiers were lined up according to battlefield strategies, and led by major officers. The blood of the nations was poured into conditions of such horror and violence. "Lions led by donkeys", was how the German soldiers referred to their British counterpart. Ever since the end of WW1 in 1918 which was won by the British allies against the Germans it has been hugely debated whether the phrase 'Lions Led by Donkeys' is correct. ...read more.

His parents both served with the Australians in Gallipoli and France. It is clear that the book's aim was to expose the brutality and 'guilt' of the uncaring generals. The verity that the author still had a strong opinion towards Haig's actions, years after the Battle of the Somme ended, gives the impression that Haig really was an incompetent "donkey". This source is useful in helping people come up with a strong intuition of who Haig really is. Although it sounds very biased, it is very useful, as it is still an opinion and an attitude. However, there are some limitations to this source; Laffin does not discuss the situation at Verdun, which is a cause that should be looked at. Also, he was not an eyewitness, making us questions if Haig was really a "donkey" and a coward. Source 2: A quote from a British general who fought in both wars. 'Germany's spirit of resistance was broken by the courage and resolution of Haig's armies, which had complete confidence in the leadership of their Commander. They were inspired by his determination, for he never wavered from his purpose of breaking down the powers of resistance of the enemy, both morally and physically. ...read more.

On the other hand, the British General who wrote it, may have been treated better compared to the soldiers, and so feels and thinks differently of Haig. Haig encouraged the development of advanced weaponry such as tanks, machine guns and aircraft. CONCLUSION In conclusion, Haig was an incompetent donkey, who caused the many tragic deaths during the Battle of the Somme. He was generally unprepared but wanted to gain victory, by overpowering the numbers of men; even with the large numbers of casualties on the first day, Haig allowed for the Battle to continue, even though he did not gain land and did not get any advantage. The phrase "lions led by donkeys" was not so much of a fair description of the Battle of the Somme; it was a bit too harsh. The soldiers may have felt bossed around, but seeing that they were inexperience civilians who volunteered, made it seem like Haig had a reason to come up and boss them around telling them what they had to do and sending them to their deaths. The generals, soldiers and commanders were all just trying to do their best to win victory and success. 1 http://www.historylearningsite.co.uk/general_douglas_haig.htm 2 http://www.firstworldwar.com/bio/haig.htm 3 http://www.spartacus.schoolnet.co.uk/FWWsomme.htm 4 www.johndclare.net/wwi3_HaigQ4.ppt 5 www.johndclare.net/wwi3_HaigQ4.ppt 6 http://www.bbc.co.uk/history/worldwars/wwone/lions_donkeys_01.shtml 7 http://www.firstworldwar.com/bio/haig.htm 8 http://www.bbc.co.uk/history/worldwars/wwone/lions_donkeys_01.shtml ?? ?? ?? ?? ...read more.