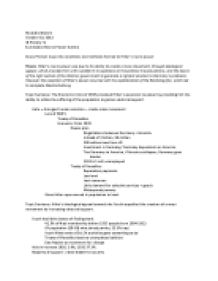 Assess the conditions and methods that led to Hitlers rise to power.

﻿Mustafa Ghanim October 10, 2012 IB History Y1 Summative Rise to Power Outline Essay Prompt: Asses the conditions and methods that led to Hitler?s rise to power. Thesis: Hitler?s rise to power was due to his ability to create a mass movement, through ideological appeal, which provided him with a platform to capitalize on the political miscalculations, and the desire of the right section of the Weimar government to generate a rightest solution to Germany?s problems. However the cessation of Hitler?s power occurred with his capitalization of the Reichstag fire, which led to complete Gleichschaltung. Topic Sentence: The Economic Crisis of 1929 provoked Hitler?s ascension to power by providing him the ability to utilize the suffering of the population to garner electoral support. ...read more.

Topic Sentence: Hitler?s ideological appeal towards the Youth expedited the creation of a mass movement by increasing electoral support. Youth had little chance of finding work. 41.3% of Nazi membership before 1933 people born 1904-1913. Of population (20-30) who joined parties, 25.3% nazi. Youth filled ranks of SA, SA activities gave something to do? Treaty of Versailles leads to unemployed soldiers Saw Nazism as movement for change Aids in increase 1928, 2.6%; 1932 37.3%. Majority of support = ideal leader for country Hitler?s ideals = right side of gov = destroy democracy + socialism Hitler in power, thought he could be manipulated to will. Topic Sentence: Hitler?s notion of a National Community appealed to the working and middle classes, resulting in increased electoral support. ...read more.