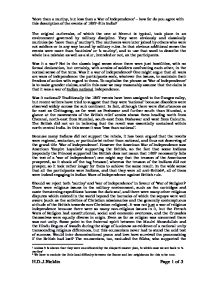 'More than a Mutiny, less than a War of Independence' - Do you agree with this description of the Events of 1857-8 in India?

The original outbreaks, of which the one at Meerut is typical, took place in an environment governed by military discipline. They were obviously and classically mutinies (so 'more than a' mutiny1). The mutineers were later joined by others who were not soldiers or in any way bound by military rules. In that obvious additional sense the events were more than 'mutinies' or 'a mutiny', and to use that word to describe the whole is a mistake as well as a slur, intended or not, on the participants. Was it a war? Not in the classic legal sense since there were just hostilities, with no formal declaration, but certainly, with armies of soldiers confronting each other, in the normal sense of the term. Was it a war of independence? One might argue that all wars are wars of independence: the participants seek, whatever the issues, to maintain their freedom of action with regard to them. To capitalise the phrase as 'War of Independence' is to make grander claims, and in this case we may reasonably assume that the claim is that it was a war of Indian national independence. Was it national? Traditionally the 1857 events have been assigned to the Ganges valley, but recent writers have tried to suggest that they were 'national' because disorders were observed widely across the sub continent. In fact, although there were disturbances as far east as Chittagong, as far west as Peshawar and further south than Mumbai, a glance at the movements of the British relief armies shows them heading north from Chennai, north-east from Mumbai, south-east from Peshawar and west from Calcutta. ...read more.

Farming for food had been reduced in favour of farming for cash crops such as indigo and, infamously, opium. The East India Company was a major player in this trade as was Jardine Matheson; but their profits made India more vulnerable to famine. Indian crafts and industries, particularly textile industries, were deliberately and significantly disadvantaged by tariffs in favour of British products. In many areas Indian options were reduced to a choice between working in the opium or indigo plantations or joining the British army. Where these factors operated there was anti British feeling on a large scale. Besides these there were numerous special groups such as the Nawab of Awadh's jugglers and former soldiers, and zamindars whose fortunes ebbed and flowed as the British tried different ways of getting more 'tax Britannica' out of the Indians. Some of these grievances were felt very widely, but the Scindia of Gwalior was not going to take up arms for an indigo planter and nor, given a choice, would Bahadur Shah have done; tax farmers and tax payers had very different grievances. It would be hard to find any example in history where a national rising was exclusively motivated by economic considerations. We can agree that the causes of the rising went wider and deeper than simply military issues, but that in the economic sphere there were several different 'wars of independence' being fought, none of them national and not all of them against the British. ...read more.

and the hajji Ferozh Shah all failed the test. But we do not deny that the Welsh were engaged in a War of Independence because Llywelyn and Owain Glyndwr failed, nor the Saxons because Hereward the Wake did not remove William the Conqueror. Historians have a duty to inform, but they speak to the uninformed. For the uninformed a label assumes disproportionate significance because it acts as an emotional doorway to the truth. If one is emotionally committed to a view of things, one will not willingly enter by a doorway marked with words which seem to promise that an objectionable alternative view lies within. The handful of British chauvinists who gave offence by presenting themselves at Lucknow in 2007 may be the last with any shred of an emotional commitment to the word 'Mutiny'. There are far more who want to cherish the phrase 'War of Independence' because, like a national flag, it provides a decent covering to an undignified jostling of heroes and scoundrels propelling bandwagons of every description. What technically began as a mutiny developed into several unsuccessful 'Indian wars of independence'. 1 unless it is shown that they were co-ordinated by the chapatti master plan, in which case we are back to 'a mutiny' 2 We have to exclude the little local difficulty between the Ranee and her neighbours for this to be true. ?? ?? ?? ?? 'More than a mutiny, but less than a War of Independence' - how far do you agree with this description of the events of 1857-8 in India? H.D.J.Nicklin Page 1 of 3 ...read more.