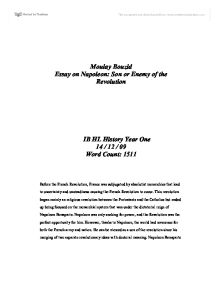 Napoleon: Son or Enemy of the Revolution

Moulay Bouzid Essay on Napoleon: Son or Enemy of the Revolution IB HL History Year One 14 / 12 / 09 Word Count: 1511 Before the French Revolution, France was subjugated by absolutist monarchies that lead to uncertainty and unsteadiness causing the French Revolution to occur. This revolution began mainly as religious revolution between the Protestants and the Catholics but ended up being focused on the monarchial system that was under the dictatorial reign of Napoleon Bonaparte. Napoleon was only seeking for power, and the Revolution was the perfect opportunity for him. However, thanks to Napoleon, the world had reverence for both the French army and nation. He can be viewed as a son of the revolution since his merging of two separate revolutionary ideas with doctoral meaning. Napoleon Bonaparte was against the Revolution, which is why he went against values by blending his thoughts with the ones of the ancient regime. The old regime was deplored by the French Revolution, and tried to give France opposing and different ideas about society, equality and so on. Napoleon introduced features which would be more commonly associated with the ancien r�gime and the era of enlightened despotism. He was careful, for example, to avoid any explicit statement of ideology in his constitutions; hence there was no reference to the libert�, �galit�, fraternit� of the Revolution (Lee, 20) Napoleon's aim was to maintain the goal for the revolution by striving to bring together opposing thoughts that dominated the French citizens. ...read more.

True, no individual was formally excluded from a title of the basis of religious creed or lowly social birth, and there were some remarkable examples of the most common born rising to high places. Yet in granting honors on the basis of service to the state, Napoleon favored certain groups. Military men gained by far the largest share of titles, with state official and administrators coming in a distant second (Alexander, 48). In order to please his nation and accomplish his own objectives, Napoleon combined his thoughts with the ones of the previous rule. Napoleon did not utterly have faith in equality for he disapproved the freedom of women. However, he did establish the civil code and brought his nation together "Napoleon's attitude to women marked a complete departure from the liberalizing tendencies of the Revolution; he insisted on a complete return to Roman Law, and the subjection of wives to their husbands" (Lee, 24). He strained the substandard social standings of the roles women had for their spouse. "Feminist writers often point to the Napoleonic codes as a capstone of Revolutionary gender bias. There is a certain point to this. The civil code was patriarchal in character, consistently enhancing the legal status of the eldest male in a family, depriving married women of property rights, and creating a remarkable double standard when it came to matters such as divorce or acting as legal witness" (Alexander, 52). ...read more.

By 1810 he had reversed the Revolution's emphasis on direct taxes and had, apparently, adopted a series of measures similar to those of eighteenth-century Prussia" (Lee, 22). Because of Napoleons rule, numerous political guiding principles were modified. By focusing on the ancient regime, Napoleon, the leader of France was in opposition towards the revolution. During his rule, the ancient regime was reflected through the monarchial judgments. "Like Louis XIV, he was upheld by the concept of Divine Right. An extract from a catechism used by the French Church after 1804 reads:' God has established him as our sovereign and had made him the minister of His power and His image on earth'. He also adopted, in 1807, the title le Grand, thus following the example previously set by eighteenth-century rulers like Peter I, Frederick II and Catherine II" (Lee, 20). Napoleon seized the opportunity to fulfill his hunger and strive for power by taking advantage of the revolution. To conclude, whether Napoleon was the son or enemy of the revolution remains a matter of debate. He embraced revolutionary ideologies, yet employed dictatorial methods. " At one extreme, Napoleon appeared as a manifestation of Revolution, especially in those parts of Europe which had not previously been affected by revolutionary upheaval. At the other, the Napoleonic Empire was seen as a perversion of the revolutionary ideal; Trotsky, for example, later used Bonapartism as a term of abuse to describe the capture of a revolution by military reactionaries" (Lee, 25). Napoleon encouraged and stimulated his people because of his powerful acts to bring his people together. ...read more.