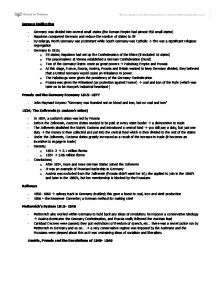 German Unification - Germany was divided into several small states (the Roman Empire had almost 350 small states) - Napoleon conquered Germany and reduce the number of states to 39 - By enlarge, North Germany was protestant while South Germany was Catholic --> this was a significant religious segregation - Germany in 1815; o 39 states; Napoleon had set up the Confederation of the Rhine (it included 16 states) o The peacemakers at Vienna established a German Confederation (Bund) o Two of the Germany States count as great powers --> Habsburg Empire and Prussia o At this stage, France, Russia, Austria, Prussia and Britain wanted to keep Germany divided, they believed that a United Germany would cause an imbalance in power o The Habsburgs were given the presidency of the Germany Confederation o Prussia was given the Rhineland (as protection against France) --> coal and iron of the Ruhr (which was later on to be Europe's industrial heartland ) Prussia and the Germany Economy 1815- 1877 - John Maynard Keynes: "Germany was founded not on blood and iron, but on coal and iron" 1834; The Zollverein (a custom's union) - In 1834, a custom's union was led by Prussia - Before the Zollverein, customs duties needed to be paid at every state border --> a disincentive to trade - The Zollverein abolished the State's Customs and introduced a central fund --> you still pay a duty, but just one duty --> the money is then collected and put into the central fund which is then divided to the rest of the states - Under the Zollverein, Customs duties greatly increased as a result of the increase in trade (it becomes an incentive to engage in trade) - Bavaria; o 1831- 2 --> 2.1 million florins o 1834 --> 3.86 million florins - Conclusions; o After 1834, more and more German States joined the Zollverein o It was an example of Prussian leadership in Germany o Austria was excluded from the Zollverein (Prussia didn't ...read more.

Secondly, he wants to isolate Austria from Russia (make Austria more politically isolated) --> pure power politics 1863-5; Bismarck and the Danish War - In 1863, Denmark; there was a disputed succession between Christian of Glucksburg and the Duke of Augustenburg --> Christian of Glucksburg became King of Denmark in November 1863; he signs a constitution which incorporated Schleswig into Denmark - This infringed the treaty of London of 1852. It raised the question of Schleswig- Holstein (two duchies. Should they belong to Denmark or Germany?) - January 1864; Bismarck induced the Austrians to sign an alliance with Prussia against Denmark. The purpose of this was to stop Schleswig- Holstein becoming a part of Denmark - Holstein was occupied by the army of the German Confederation but now, Prussian and Austrian armies moved through Holstein - February 1864, Austrian and Prussian troops entered Schleswig - Denmark resisted and there was a brief war, which obviously Denmark lost - A conference met --> it couldn't solve the problem and war broke out again in June, late 1864 and again Denmark was defeated - August 1864 --> the King of Denmark gave up his right of Schleswig- Holstein to Austria and Prussia - Conclusion; o The Prussian army gains military experience, as well as the Austrian army o Britain was willing to offer support to Denmark; this was a huge mistake in British Foreign Policy o The importance of what happened so far: Bismarck wants to exploit this issue to obtain Prussian domination of Schleswig- Holstein and Prussian domination of the River Main o The troops of the German Confederation had had to leave Holstein --> Prussia and Austria dismissed them The Convention of Gastein; August 14, 1865 - By this convention, the joint administration of Schleswig - Holstein and Prussia was ended and instead, the two Duchies were divided - Holstein; closest to Prussia was put under Austrian administration - Schleswig was put under Prussian Administration - Bismarck was looking to cause a war with ...read more.

of Hanover, Hesse- Cassel, Nassau, Frankfurt, Schleswig- Holstein by force to Prussia; forming a greatly enlarged Prussia --> 4 million new Prussian subjects o Italy gained Venetia o Grenville: many of the new citizens probably didn't want to be Prussians. Were they asked? No... this encourages the idea for Prussia to become Germany o Austria was excluded from Germany o Prussia to dominate the new North German Confederation o A change in the balance of the German and European power Bismarck and the Southern States - The Southern States were therefore not included in the new structure in Germany - The Southern States are largely Catholic, the Northern States are largely Protestant - The Southern States were Bavaria, Baden, Wurttemberg, Hesse- Darmstadt --> Bavaria was the largest and most important of these states - For the next four years, Bismarck worked consistently to draw the Southern States into a closer relationship with Prussia - August 22, 1866; a day before the Peace of Prague, there was a secret treaty between Prussia and Bavaria - Bavaria was brought into military agreements with Prussia --> in the event of a war, Bavaria was likely to fight with Prussia The Ausgleich of 1867 - Ausgleich actually means the union of Austria and Hungary with the Dual Monarchy; reasons for this- o Either a sign of Austrian weakness --> Austria has got to gather her strength o Or on the contrary, Austria is getting ready for a second round against Prussia - The Ausgleich is a delayed result of the events of 1866 France and 1866 - France had remained neutral in the summer of 1866 --> it did not mobilize - Napoleon III did want to be involved, in regards to the annexation of Venetia to Italy. To some extent, Napoleon had expected some rewards or compensation - Retrospectively; France believes that they should have gotten involved in the Seven Weeks War because they allowed another superpower to emerge in Europe when they could have stopped it ...read more.