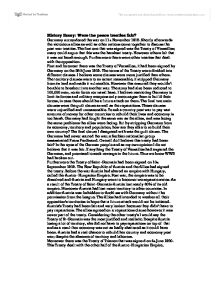 History Essay: Were the peace treaties fair? Germany surrendered the war on 11th November 1918. Shortly afterwards the victorious allies as well as other nations came together to discuss the post war treaties. The first one that was signed was the Treaty of Versailles; many could argue that this was the harshest treaty. However others felt that it was not harsh enough. Furthermore there were other treaties that dealt with the opposition. First and foremost there was the Treaty of Versailles, it had been signed by Germany on the 28th June 1919. The terms of the Treaty were divided into different clauses. I believe some clauses were more justified than others. The territory clauses were to an extent reasonable, it stripped Germany from its land and made it vulnerable. However this ensured they wouldn't be able to breakout into another war. The army had also been reduced to 100,000 men, no air force nor naval base. I believe restricting Germany to limit its forces and military weapons only encourages them to build their forces, in case there should be a future attack on them. ...read more.

The Treaty of Trianon was too harsh on the country considering it shared an Empire with Austria but still managed to take the full impact from the allies. The reparations clause was unfair considering Austria did not have to pay reparations. As a result of the reparations, Hungary would face an economic downfall. Similarly to Germany, it would suffer the consequences. Without a port, resources, labour force nor industry Hungary would have to rebuild its economy from scratch due to the harsh treaty. The Treaty of Neuilly was signed on the 27th of November 1919. This was the treaty of Bulgaria. Similarly to Hungary, Bulgaria had a severe treaty. Bulgaria lost its territory to the Allies, she also had to pay reparations over $400 million and her army was reduced to 200,000 men. Although Bulgaria lost a fair amount of country it was also faced the second highest reparations clause after the Treaty of Versailles. It had also been agreed that 20 years later, Bulgaria would receive the territory she lost. However Bulgaria had never regained these lost lands. Bulgaria also had to give up access to the Mediterranean Sea. ...read more.

Turkey was considered the "sick man of Europe" Finally the Treaty of Brest-Litvosk signed on 3rd March 1918 between Russia and Germany. The Treaty had been intended to end the war between Russia and Germany so that Russia could focus on the civil war within its own country. The Treaty meant that Russia lost Ukraine and Finland. In addition she had lost 62 million people and a majority of its industry and agriculture. Due to Germany's defeat of the war it had also meant that many countries such as: Finland, Estonia, Latvia, Lithuania, Ukraine and Poland were to become independent states without a monarchy. This Treaty had a bitter affect on Russia. In conclusion as a result of World War One these Treaties had been designed for opposition. The countries that were allies with Germany must have felt bitter and resentful towards the Allies. After World War One the whole of Europe was facing economic problems especially those who had to pay reparations for the Allies to help rebuild their countries. Due to the economic downfalls political parties within the countries also clashed with each other. They all had their own ideas for economic restructuring, helping the country and its people. I believe the diplomacy between the countries would remain strong, as they had sensed revenge for the future. ?? ?? ?? ?? ...read more.