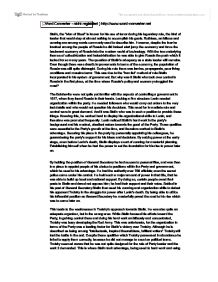 Stalin, the "Man of Steel" is known for his use of terror during his legendary rule, the kind of leader that would stop at almost nothing to accomplish his goals. Ruthless, ambitious and cunning are among words commonly used to describe him. However, despite the fear he invoked among the people of Russia he did indeed start jump the economy and force the backward economy of Russia into the modern world of technology. With the two underlying themes of collectivization and industrialization he was able to give Russia the push which it lacked for so many years. The question of Stalin's adequacy as a state leader still remains. Even though there were drastic improvements in terms of the economy, the population of Russia was still quite distraught. During his rule there was famine, propaganda, poor living conditions and massive terror. This was due to the "iron fist" method of rule Stalin incorporated in his system of government. But why was it Stalin who took over control in Russia in the first place, at the time where Russia's policy and economy struggled the most? The Bolsheviks were not quite yet familiar with the aspects of controlling a government in 1917, when they found Russia in their hands. Lacking a firm structure Lenin needed organization within the party. ...read more.

This was unfortunate, for the organization in terms of the Party was a leading factor for Stalin's victory over Trotsky. Although he is described as being among "intellectuals, inspired theoreticians, brilliant writers" Trotsky still lost the battle in the end. Despite these qualities which Trotsky possessed in abundance he failed to apply them correctly, because he did not manage to excel on political terms. Trotsky seemed aware that he was not quite designed for the role of Party leader and the work it demanded. This is where Stalin took advantage, being used to hard work and using his ability, not his intelligence to excel, he was able to take the lead from Trotsky. However, Trotsky hesitated to publish Lenin's testament until he finally decided to use it as a weapon against Stalin, which turned out to be a big mistake, and it ended up working against him in the end. After Lenin's death, Trotsky ignored how important public appearance was - his declining of the opportunity to make a major speech at Lenin's funeral in January 1924 was nothing compared to his actual failure to attend at all. This absence was like a direct insult to Lenin, and the party. Stalin's oration at the funeral implicated that the people of Russia saw Stalin as a supreme man who was true to Lenin until the bitter end. ...read more.

After concealing Lenin's testament, nothing and no one could stop Stalin's rise of power anymore. After drawing all findings together, Stalin's cunning policy and his careful thought and manipulation of situations by far simply gave him advantage to excel over Trotsky. He was aware of the qualifications and steps required in the gaining of power over the Party and he took those required steps to achieve his goal. This is where Trotsky had failed, with all his intellect and organizational skills. He was an educated man but however, the Party was in need of control, stability and a firm ruler, which Trotsky could not provide. Stalin excelled in his modest, hardworking and reliable appearance in his early year, which allowed him to build up supporters within the Party. Furthermore his loyalty to Lenin and his personality cult put Stalin in the position of trust and support among Russia's population. Stalin noticed his affect on the majority of the people and utilized it to accomplish his own ideas. These essentials and the fact, that Stalin was in the position of the General Secretary, Stalin managed to excel Trotsky, even though he surpassed with his intellect and military skills. Therefore, it was Stalin, who took control of the entire state and became one of the most significant and feared leader in both world and Russian history. ( Word Converter - nicht registriert ) http://www.word-converter.net ...read more.