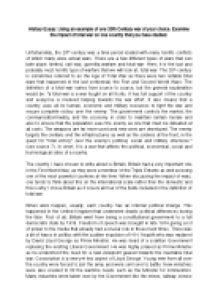 WWI. The Effect of Total War on Britain

﻿History Essay: Using an example of one 20th Century war of your choice. Examine the impact of total war on one country that you have studied. Unfortunately, the 20th century was a time period loaded with many horrific conflicts of which many were actual wars. There are a few different types of wars that can take place: limited, civil war, guerrilla warfare and total war. Here, it is the last and probably most horrific type of warfare that we will look at, total war. The 20th century is sometimes referred to as the Age of Total War as there were two notable total wars that happened in the last centennial, the First and Second World Wars. The definition of a total war varies from source to source, but the general explanation would be: ?a total war is a war fought on all fronts. It has full support of the country and everyone is involved helping towards the war effort. It also means that a country uses all its human, economic and military resources to fight the war and ensure complete victory over the enemy. The government controls the market, the communication/media, and the economy in order to maintain civilian morale and also to ensure that the population sees the enemy as one that must be defeated at all costs. ...read more.

Britain would later go on to become the main country in the League of Nations. Also, people who would rise to fame a little later like Winston Churchill were to make their first appearances and gain the people?s respect. In the time of total war, a country?s economy usually over goes major changes, mainly negative. It is said that Britain spent roughly 20% of its wealth during the war. It had to sell off most of its colonies that were their main sources of importation. Britain also saw its National Debt rise from 650 to 7000 million pounds. It had to borrow very large sums of money from both the United States and Russia. Taxation was increased by a rather large amount. Britain?s exportation challenge continued after the War as countries were now more self-sufficient or imported food from other cheaper locations. In addition, after the war, the many people that had been forced into war related jobs were now jobless so the unemployment scale shot up. Anyway, the biggest economic challenge the United Kingdom had to face during the war was the lack of food. In 1916, Germany started using their U-boats to sink the Allied food supply ships going to Britain in order to make them surrender. This technique was rather successful and therefore rationing was introduced. ...read more.

It resembled its original sketches drawn by Leonardo da Vinci more than the steel powerhouse we have today. However, this invention was proved to be very unreliable especially because of the trench warfare. Two other horrific inventions would be the flamethrower and the use of gas. These were developed by the Germans to make extermination much more efficient and succinct. The new creation that had a real impact on the war itself was the submarine or U-boat. Both the Allies and the Germans possessed quite a few of these and used them to cut of the food supplies or sink ships transporting people. Later on, the expansion of air vehicles started with the building of new safer and more precise aircrafts. The First World War is arguably a transition period between the old 18th century weaponry and the more modern technology. Britain was undoubtedly greatly affected by World War One on the political, economical, social and technological sides. New leaders were brought into power and brought with them new ideas. Though, Britain?s economy was not very bright as they saw their National Debt grow out of hand. Famine came to the United Kingdom and new measures had to be put in place. Conscription was brought in, women were given men?s jobs and the press gained free speech. Technology and science reached new peaks. Weaponry had to adjust to the rapidly changing style of warfare. In short, WW1 was a time of great change both good and bad and on many fronts for Britain. ...read more.