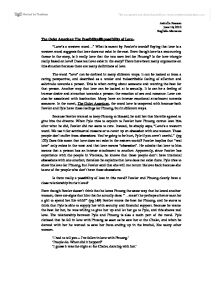 The Quiet American: The Possibility/Impossibility of Love-

The Quiet American: The Possibility/Impossibility of Love- "Love's a western word..." What is meant by Fowler's words? Saying that love is a western word suggests that love does not exist in the east. Even though love is a reoccurring theme in the story, is it really love that the two men feel for Phuong? Is the love triangle really based on love? Does real love exist in the story? There have been many arguments on this situation because there are many definitions of love. The word "love" can be defined in many different ways. It can be looked at from a caring perspective, and described as a tender and indescribable feeling of affection and solicitude towards a person. This is when caring about someone and wanting the best for that person. Another way that love can be looked at is s******y. It is can be a feeling of intense desire and attraction towards a person- the emotion of s*x and romance. Love can also be associated with fascination. Many have an intense emotional attachment towards someone. In the novel, The Quiet American, the word love is tampered with because both Fowler and Pyle have these feelings for Phuong, but in different ways. Because Fowler wanted to keep Phuong to himself, he told her that his wife agreed to give him the divorce. When Pyle tries to explain to Fowler how Phuong cannot love him after what he did, Fowler did not seem to care. ...read more.

'You know, I think it was seeing all those girls in that house. They were so pretty. Why, she might have been one of them. I wanted to protect her. (pg 49) Pyle stated that he fell in love with Phuong, and that he wants to give her protection and security. Is this love? He instantly "fell in love" with her when he got close to her, and he wants to provide for her. This is a comparison to how the Americans always try to get involved with the Vietnam War and they try to help, but they don't realize that their actions are not always useful. Another possibility of love in this novel is Pyle's love for Fowler. Love can mean that they care about that person, and this shows throughout the novel. 'And we can still remain friends, Thomas?' 'Yes, of course.' 'I've said it before, I know, but I do really wish it hadn't been you.' (pg 148) Pyle constantly worries about his friendship with Fowler and asks if they can still be friends after all this. He clearly values this friendship dearly and he wouldn't want it to end. Pyle's love for Fowler is also shown when he saves his life. Fowler has broken his foot and wouldn't have been able to escape the attacks if it hadn't been for Pyle. ...read more.

Knowing this, Fowler is aware that he should not fall in love with Phuong because he would never get that back in return, and therefore he claims that he doesn't really love her. At the end, Phuong ends up back in Fowler's arms. She is very happy that she is able to be with the man she knows and is comfortable with. Furthermore, Fowler is also glad that he is with the woman of his dreams. Is he happy that he gets to be with her and spends his life with her? Or is he glad to win her over his friend, Pyle, and gets to keep her as a token of victory? This leaves the story's ending ambiguous because readers are left unsure of what happened and who killed Pyle. Was it Fowler's great desire to win Phuong over? Do they really love her? This question remains throughout the novel and it stays unanswered and unclear. There are parts and hints that Pyle and Fowler really have fallen in love with her, but according to Fowler's words, this is just an obsession. It is not true love. Fowler wants her in bed, and Pyle wants to save her from the brothel because it makes him feel like a good person doing the deed. "The Quiet American" contains the reoccurring theme of love and friendship, even though it is not vaguely possible for love to exist in this situation. ?? ?? ?? ?? Astrella Rosano June 14, 2010 English- Marzena ...read more.